Researcher at the Phenotrans Corporation

Researching for the cure.

Make it out of Willamette.

Find the orphan and clear her family name (both succeeded).

Isabela Keyes is the sister of Carlito Keyes and a major character in Dead Rising. During the events of the first game, Isabela reformed and aided Frank West in stopping her brother's plot. Over time, she helped develop Zombrex, which helped zombie infectees delay the process. However, her intentions are once again suspicious around the time in the third game, it was revealed that she is the instigator of the plot.

Isabela is first seen in the entrance of Willamette Mall where Frank is looking at her. He tries to approach her, but a man stops him, saying this is no time to be ogling at the ladies. Later, he saw her again being held hostage by Steven Chapman, the manager of a supermarket. Frank saves her, but she runs away, accusing him of being responsible for ruining Santa Cabeza, the hometown she lives. When Frank next encounters Isabela, she attacks him while riding a motorcycle, but he defeats her.

She reveals that the zombies are created by the Americans, not her and Carlito. It is used as their tool of vengeance. Isabela introduces herself to Frank and promises to bring Carlito for interrogation. However, she returns with a gunshot wound to her shoulder. It is revealed that Carlito has done it since he is outraged by the meeting. From that point on, Isabela aids Frank in stopping her brother's plot and helps develop a medicine that stalls his zombification following a bite from one that attacked him on the helipad. This later developed into Zombrex. Her ultimate fate is initially unknown, as she is last seen in the game kicking at zombies after she and Frank defeated Brock Mason.

It is revealed that Isabela survived the events of Dead Rising and is now a researcher working on behalf of Phenotrans under the control of Marian Mallon. She tries her best to help Frank and Chuck Greene, but is captured and has her research destroyed by Harjit Singh before she can get to them.

Isabela returns in the third game, set ten years later, where it turns out that the protagonist Nick Ramos was, in fact, one of the orphans in Carlito's plot. She provides as much help as she can and shows how Nick does, in fact, possess the cure to the zombie outbreak inside him, making him the one orphan out of Carlito's group that would be a safeguard. Reunited with Chuck among new allies, Isabela boards the plane constructed by Nick and his crew to escape Los Perdidos before the firebombing commences. Nick defeats General Hemlock and stops the firebombing. Prior to leaving, Isabela mentions that she has to retrieve something.

In the secret ending to the game, achieved by defeating Overtime Mode, Isabela watches a recording on her laptop. The recording is of a conversation between her and Mallon that reveals that Isabela was the one who was responsible for the outbreak in Los Perdidos. She knew of the presence of and deliberately triggered the zombie infection so she could root out the cure-bearing orphan (Nick). Isabela openly states that any lives lost in the process would be inconsequential, so long as she goes down in history as a hero for finding the cure — no matter the cost. After viewing the recording, Isabela promptly destroys the laptop and rejoins the others.

She is eventually hailed as a hero for creating the vaccine for the outbreak.

It's unknown what happened to Isabela Keyes during the events of Dead Rising 4. But her wish of exposing the Pentagon and the U.S government for the massacre of Santa Cabeza came true thanks to Frank West, who finally had real and convincing evidence. 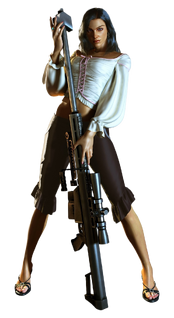 Retrieved from "https://villains.fandom.com/wiki/Isabela_Keyes?oldid=4308536"
Community content is available under CC-BY-SA unless otherwise noted.