The Strange Thing About the Johnsons

Make his father love him forever.

Kill his mother (both failed).
Keep his incestuous relationship a secret (succeeded through his mother posthumously).

Isaiah Johnson is the main antagonist of the 2011 infamous indie short horror film The Strange Thing About the Johnsons.

Isaiah is first seen in his room pleasuring himself to a picture he had in his hand. Without much warning, his father Sidney Johnson arrives in the room, interrupting him from climaxing. After a well-intentioned speech about the circumstance, Sidney leaves his son to finish up. It is then revealed that Isaiah was pleasuring himself to a picture of his father when he was younger. During an unknown amount of time, Isaiah had continually worsened eventually resorting to sexually harassing his father which most likely began when his father came home crying after attending Isaiah's prom most likely as a result of the harassment.

14 years later, Isaiah acquires a respectable background and is married. Unfortunately, the abuse just continued. During the wedding reception, his mother Joan hears a commotion and peering through a hole in a fence, she is horrified to see Isaiah rashly unbuttoning his father to perform oral sex on him. Despite seeing this, Joan decides to do nothing about it.

Sidney had since taken to writing a manuscript entitled Cocoon Man: Confessions by Sidney Johnson, and places the memoir under his wife's pillow. Isaiah arrives claiming that his toilet was broken and he goes into Sidney's bedroom. He discovers the document and tries to guilt-trip his father about what he had written, accusing him of starting his spiral into incestuous obsession. After Isaiah informs him that he will burn the manuscript and being warned that he'd do something worse shall he make more, Sidney reluctantly gets rid of the memoir.

Alone in the bathroom, Sidney lays in the bathtub, listening to a voice track. After demanding that his father open the door failed, Isaiah kicks down the door, frightening a scared Sidney before viciously raping him. Joan overhears her husband crying out for help, but she turns the volume on the television up to drown out his screams. After raping his father, Isaiah shuffles out of the room, spitefully telling him to "pen that in his book." This serves as the breaking point for Sidney who uncovers a secret copy of his memoir. Isaiah tries to talk his father out of getting it published with the same tactics he used before. This time, Sidney chooses to escape, and he runs out of the house, a memoir in hand, only to get run over by a white van. Distraught, Isaiah angrily demands Joan to call the ambulance.

Shortly after the funeral, Isaiah decides to wear one of Sidney's sweaters to remember him. Joan arrives in the room, asking her son how long the sexual abuse happened. Isaiah attempts to convince her that she was being irrational only to be struck by her. Enraged, Isaiah engages in a scuffle with his mother and he goes to push her headfirst into the fireplace. Setting her sights on a fire iron, Joan makes a grab for it and slams it on her son. After hitting him again, Joan repeatedly bludgeons Isaiah with the fire iron until she broke down inconsolably. The film ends with her throwing Sidney's second copy of his memoir into the fire, keeping this dark family secret to herself.

Isaiah prepares to rape his father. 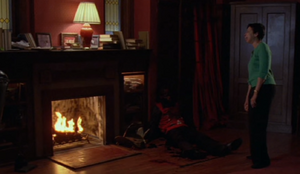 Isaiah’s death.
Add a photo to this gallery 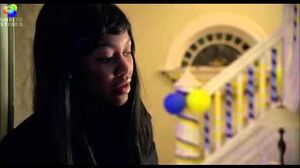