Iselob Starfryed is a lobster-themed Gangler Monster and is the main antagonist in episode 39 of the 2018 TV series Kaitou Sentai Lupinranger VS Keisatsu Sentai Patranger. Also he is equipped with a Bird Brooch-like treasure called Je me change en pierre.

He was voiced by Mitsuaki Madono.

He was first seen along with his childhood friend, Jarnake Saucer attacking the city. The Patrangers arrived to stop them. But during the battle, Zamigo Delma arrived at scene. Iselob was delighted to see him but only to get apparently killed by him.

However, it was revealed that Zamigo did not killed him but let him out of the ice. Speaking of which he made his second appearance right at docks freed from icy prison. Once he explained that Zamigo transported him somewhere else the police transformed and battled Iselob. During the fight he used the treasure's ability causing the cops to float into the air making them easy targets for him to shoot after that he left the scene.

A while later disguised as a human he appeared at the sewers tunnel complimenting himself that he easily fooled the cops, but his cover was then blown by the arrival of Lupin Red. So the result was to battle him during the fight he used the treasure's ability to sent him into the air, but Lupin Red counter that as he used the grappling hook to collide into Iselob. After that Lupin Red pinned Iselob to the ground as Lupin Red gained access to his safe (which his password is 9-1-7) and got Je me change en pierre (which translate as "I want to fly") Bird Brooch. However before he could finish him off Zamigo arrived to help Iselob out in the fight. After that Lupin Red used the VictoryStriker to predict Zamigo's attack then he was about to finish him off, but Zamigo froze Iselob instead and used him as a human shield to take the blast.

However thanks to Goche Ru Medou Iselob is then enlarged and is now battling Victory LupinKaiser during the fight Iselob used the Uchiwax as a jetpack making him to fly in the air, however he's now battling the robot in flight mode. After that he was then destroyed by this finisher called GoodStriker: Smack 'Em Down Kick. 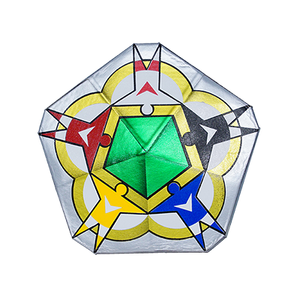 Retrieved from "https://villains.fandom.com/wiki/Iselob_Starfryed?oldid=3509220"
Community content is available under CC-BY-SA unless otherwise noted.