Founder and Goddess of the Ishtar Familia

Destroy Freya Familia and estabilish her Familia as the strongest of Orario.
Seduce and rape Bell Cranel so she can make him her plaything and strike Freya emotionally (all failed).

Ishtar, also known as the Goddess of Love, is a goddess of beauty and a major antagonist in the light novel, manga and anime series Is It Wrong to Try to Pick Up Girls in a Dungeon? introduced as the main antagonist of Volume 7 of the light novel and season 2 of the anime.

She is the Goddess of Love of Orario and the leader of Ishtar Familia that rules over a large portion of Orario and manages a Red Light District called Love District, where she controls all brothels composed of sexual slaves Ishtar bought from many different regions of the continent. As the head of her Familia, Ishtar allows her women to kidnap and rape any men they find to be attractive without any consequences and does the same by building a harem of brainwashed young men.

Using her Charm ability to seduce men, Ishtar engages in sexual activities with almost everyone and is not above raping men to get what she wants. She despises Freya, a fellow goddess of beauty and the most beautiful Goddess of Orario, and is envious of her beauty. To overthrow Freya, she bought Haruhime and tried to sacrifice her to boost the abilities of her Amazons so she could wage war against Freya Familia and defeat Freya through military means in order to become the most beautiful woman and control the strongest faction of Orario.

She is voiced by Honda Takako in the Japanese version, who also voiced Nightmare Moon, Hunter J, and Silver Sable, and by Courtney Lomelo in the English dubbed version.

The leader of the Ishtar Familia, Ishtaar is able to charm both Gods and children with her beauty. Her familia's main business in Orario is prostitution. She has a rivalry with Freya, and upon learning of her interest in Bell, she orders her followers to kidnap him in order to seduce him. However, this end up unleashing Freya's anger upon her, as Freya uses the incident to destroy her Familia.

Ishtar is the embodiment of lust and is a very cold-hearted individual who sees everyone, even her own Familia, as pawns and men as sexual slaves for her own pleasure. As the Goddess of Love, she goes against her representation and unleashes her sexual and lustful desires over the mortal realm, kidnapping attractive men to add them to her harem or force them to be clients in her brothels. When men refuse to be part of her harem or business, she does not hesitate to send them to her dungeons, where they are tortured and raped to death by Phryne Jamil.

Ishtar is also a very composed, mature, and calm individual and prefers to act using mind games and manipulation instead of resourcing to violence. When "democracy" ends, she also immediately resources to violence and brutality by sending her Amazons after her victims and have them beaten to a near-state of death. If anyone from her own Familia goes against her orders, she will have them tortured and later rape their near-dead bodies until they can no longer disobey her.

Ishtar was quite self-confident, estimating her own chances of success highly and dismissing obstacles in her path. She gloated over her successes, even before achieving them, hinting her narcissistic personality that tends to show up when she is about perform a scheme or declares someone to be hers. She did not like to take risks, but often considered her own position so strong as to limit the actual risk involved. For all her confidence, though, Ishtar was willing to listen to advice from trusted subordinates and she was willing to change her position when it proved necessary.

In the rare occurrence in which she is caught off guard, Ishtar's monumental temper surfaces, showing a lighty shock but makes it look light and always finds a way to overcome difficulties with her genius-intellect. Ishtar was a person of absolute ruthlessness and was willing to use her harem and subordinates as human shields in case she was defeated, showing that in the end, she is a coward who is afraid of fighting and runs away when she is found surrounded.

Ishtar is a Goddess of Beauty, one of the many Gods who live in Orario and came to human world to feel entertained using a mortal vessel. As a Goddess of Beauty, she founded her own familia, the Ishtar Familia, and recruited many Amazonesses to form her own private army of female adventurers. Ishtar was a narcissistic goddess to the core and saw Freya, another Goddess of Beauty, as her rival and was jealous of her. Taking the amazonesses as her personal army, Ishtar allowed them to kidnap any men they found attractive and raped them until they became personal sex toys of her familia. She even allowed her Familia's captain, Phryne Jamil, to rape men to death with BDSM stuff and brutal sexual activities.

When Ishtar finds an attractive man, she charms them and transform them into her playthings, such as sex slaves or servants to satisfy her needs. Owning the Pleasure District for herself, Ishtar buys female slaves from outside of Orario and force them to become prostitutes just so she can keep her business working and help her familia become the most wealthy organization in Orario. At one point, she bought a Renard woman called Sanjouno Haruhime due to her possessing an ancient magic known as "Uchide no Kozuchi" that is in fact a level-boosting magic that can transform adventurers in overpowered beings. Keeping Haruhime as her prostitute, Ishtar kept her locked to prevent her from escaping until one of her own subordinates, Aisha, showed sympathy for Haruhime and tried to free her. Discovering her betrayal, Ishtar ordered Phryne beat Aisha to a near-death state and personally raped her broken body until her sanity was broken so Aisha would never disobey her orders again.

Hoping to wage a war against Freya's familia due to her jealousy of Freya, Ishtar ordered the god Hermes to bring her the Killing Stone so she could use Haruhime as a sacrifice to boost her army to win the war. However, that was not enough for her and she asks Hermes about Bell Cranel (the boy Freya was interested in) but the former refused, leading Ishtar to rape Hermes so he could spill out the information about Freya's relationship with Bell. She then ordered her women to kidnap Bell and bring him to her so she could sexually abuse him just to let Freya angry, but not before Bell being almost gang-raped by 6 amazonesses. While this is happening, she orders her familia to ritual to sacrifice Haruhime. When Bell appears before her and demands that she release Haruhime, Ishtar orders Tammuz Belili, one of her charmed servants, to pin down Bell so she could seduce him. However, when she discovers that Bell is unable to be charmed, she orders Tammuz to reveal Bell's status, which shows her the reason why Bell is unable to be charmed: Liaris Freese. Seeing this, Ishtar angrily demands to know if this is some kind of joke, only for Bell to escape and save Haruhime from being sacrificed.

Shortly afterwards, Ishtar discovers the Pleasure District is under attack and is shocked to discover that Freya is personally leading the attack. While wondering why Freya would go to such lengths for just one boy, Ishtar tries to flee with two of her children, but is stopped by Freya, who has come to bid her farewell. Ishtar orders her subordinates to seize Freya, only for Freya to easily charm both of them. When Freya approaches her, Ishtar tries to bluff her way out, claiming that she had no idea that Bell was so important to Freya. However, Freya tells her that she has overlooked Ishtar's attempts to overthrow her in past, but refuses to forgive Ishtar for trying to claim Bell for herself and has decided to destroy her. Unable to reason with Freya, Ishtar tries to run away from her, only for Freya to corner her at a dead end. Seeing Tammuz sneaking up behind Freya, Ishtar tries to distract her, revealing that Bell is immune to their power of charm and offers to tell her the reason why. Hearing this, Freya states that while this makes her want Bell even more, she refuses to let Ishtar tell her. Just then, Tammuz tries to subdue Freya, only for Freya to charm him into submission. Shocked that Freya is able to charm someone who was already under her control, Ishtar angrily demands to know what the difference is between them, only for Freya to bluntly state "character". Completely succumbing to her anger, Ishtar tries to kill Freya, only for Freya to easily move out of way and slap her, causing her to lose her balance and fall several stories to the ground before her soul is sent back to Heaven, no longer able to return to the lower world. 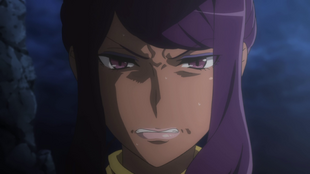 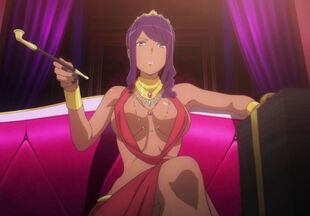 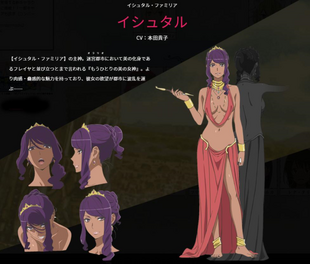 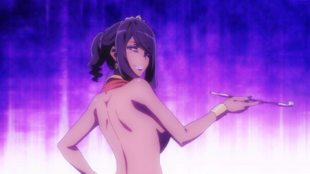 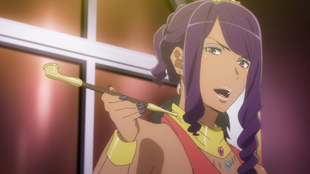 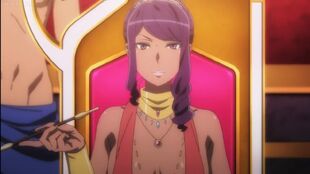 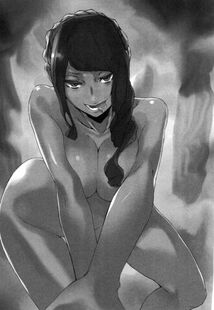 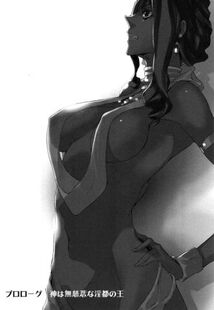 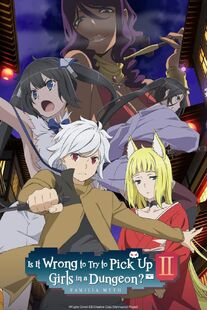 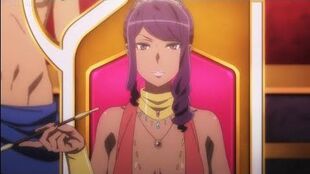 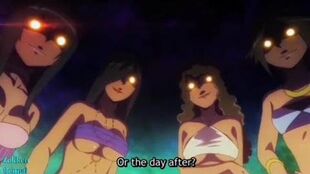 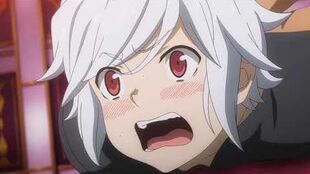 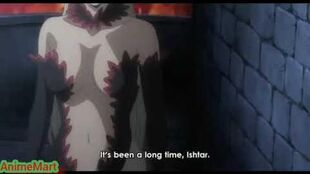 Retrieved from "https://villains.fandom.com/wiki/Ishtar_(Danmachi)?oldid=4110969"
Community content is available under CC-BY-SA unless otherwise noted.