Searching for her beloved.

Resurrect her husband Osiris by recovering his pieces (partially succeeded).

Find his heart to put in Clark Kent as a sacrifice to resurrect Osiris.
Kill Lois Lane for Clark to learn about true heartbreak (all failed).

Isis is the Egyptian Goddess of love and the Underworld in the CW Television series Smallville.

She served as the main antagonist in the episode "Isis" of the Tenth and final season.

She was portrayed by Erica Durance, who also played Brianna Withridge and Faora in the same series.

Isis ruled Egypt as an immortal pagan goddess alongside Osiris, god of death, and were married. Once she marched towards the ends of the earth to help him.

During her reign, she somehow brought the great god Ra to his knees. Her husband was later murdered by his brother Set out of jealousy and was cut into a thousand pieces doomed to roam the underworld alone.

She tried to resurrect him by collecting all the pieces, but failed to find his heart. She was then trapped in an amulet by Set for centuries. It was later said the amulet was cursed and whoever possessed it was doomed to spend eternity in the underworld.

When Lois Lane traveled to Egypt on assignment, she enters a huge pavilion tent, filled with books, ancient archeological artifacts, including the medallion of Isis. After examining the long beaded necklace of Isis, it accidentally fell into Lois' bag and she took it back by mistake to Metropolis.

Oliver planned to throw an Egyptian gala at the Metropolis Museum when he was informed that the amulet of Isis was missing from the show's pieces. Lois dressed for the party as the Egyptian goddess Isis, wearing a white costume and took her bag unaware that she had accidentally packed the amulet in it.

She heads to the Daily Planet 's roof waiting for Clark to talk to her. While looking for her lucky lipstick, Lois was shocked to find the missing amulet instead. When she held it up to the sun, she is subsequently possessed by the spirit of Isis.

Clark then arrives and tells the person whom he thinks is Lois that he was the Blur; to which she responds that the news was unimportant to her. While Clark is stunned, Isis/Lois suddenly flies away after declaring that she is now Isis.

Clark then went to Watchtower where Oliver brought him information on Isis and Osiris and their mythology. Clark sets out to find Isis who is after Osiris' heart, but is briefly stopped by Oliver, who reveals that if Osiris is brought back to life, hell will be unleashed on Earth.

Cat revealed herself and declared that she won't let Lois get away with another crime and begins to take a picture of her just as Isis prepared a fire ball. Clark arrives and super speeds Cat away to a café.

Clark returns to the museum to find the crate empty. As he leaves, he fixes the door Isis ripped open and speeds away. When she escaped from Clark, she used telescopic vision and spied on him from afar on a rooftop and night vision as she was able to see Clark perfectly in the pitch black of night.

Returning to the Metropolis Museum, Isis prepares to bring Osiris back to life, but she opens the sarcophagus only to find that it is full of dirt. She breaks down in tears just as Clark comes in and tells her it is over.

Isis declared that it cannot be over because their love is eternal and that Clark knew nothing about love. She then proceeds to push him onto the sarcophagus and binds him down, getting ready to sacrifice him to Osiris.

Cat Grant who watched her from distance is shocked and she accidentally knocks a statue over and breaks it. Isis turns and Cat runs away when she bumps into Green Arrow. He then locks Cat inside a sarcophagus and proceeds to deal with Isis. Isis senses Oliver behind her and notes that he is brave but lonely; she also notes that he doesn't want to hurt Lois' body.

She threw an energy ball at him, which he dodges,. Oliver reveals to Clark that the only way to trap Isis is for the sun to hit the amulet again, thus trapping her spirit.

Isis again throws an energy ball at Oliver long enough for Clark to break free of his restraints and grab Osiris' heart. Clark threatens to destroy the heart unless Isis releases Lois. Isis, seeing no hope, asks Clark whether Lois loves him completely.

She then tells him that because he has Osiris' heart, she will take Lois', and attempts to stab herself. Oliver fired an arrow at the amulet, sending it towards Clark, who uses his heat vision on the amulet as the "sun," re-trapping Isis and freeing Lois. She collapses in Clark's arms. 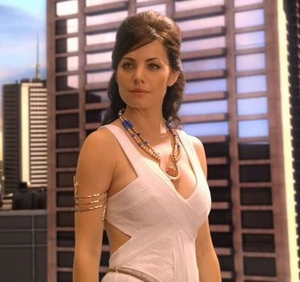 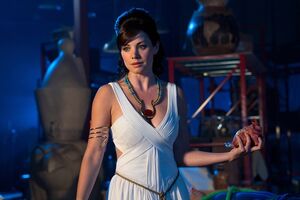