Villains Wiki
Register
Don't have an account?
Sign In
Advertisement
in: Approved Evil Articles, Pure Evil, Once Upon a Time Villains,
and 39 more

Isla (Once Upon a Time)

Order the genocide of magical creatures.

Isla is a minor, but crucial, antagonist in season 7 of Once Upon a Time. She was a human woman who hated magical beings and wanted to commit genocide against them. Despite her small participation, she is responsible for Gothel's villainy and the creation of the Land Without Magic.

Considering the fact that she was responsible for making Mother Gothel a villain and for being the main antagonist of the second half of the season, as well as having created the Land Without Magic, Isla takes the position of Bigger Bad, not only from the seventh season (of which Gothel is the main antagonist), but also from the whole plot of the series Once Upon a Time, along with Fiona, Black Fairy, who created the black curse.

She was portrayed by Emily Tennant.

Isla at first fakes to be a kind and polite girl introducing her and her human friends to Gothel. However, when Gothel reveals her powers to her and Isla's friends, Isla shows her true nature: she is genocidal, xenophobic, cruel, arrogant, murderous, sadistic and dangerous. Isla wishes to exterminate the race of magical creatures and the magic of the world that has become without magic. She is also shown to be controlling, as she refuses to let Seraphina be sympathetic towards Gothel, and is only concerned about herself when Gothel attacks the humans at the ball.

One day, Isla and her house sisters are trying on dresses when Gothel, a curious tree nymph, sneaks into their home to feel the fabric of the unworn dresses. Seeing a small rose bud on one of the dresses, she uses her own magic to cause it to blossom, unaware that the girls have re-entered the room. When Isla makes herself known, Gothel begins to panic and begs her not to tell anyone that she can do magic, but Isla lies that she is fine with her having magic and wants to learn it, declaring Gothel their new sister and inviting her to join them at Lord Adriel's ball that night.

At the ball, Isla asks Gothel to go ahead and start teaching them magic, but Seraphina attempts to protect Gothel by reminding Isla that she can't do it in public. Instead, Isla takes Gothel, Seraphina, and the sisters to an abandoned building. Despite Seraphina telling her not to do it if she doesn't want to, Gothel demonstrates her magic by reviving a flower. Only then, Isla shows the monster within by smashing the flower with her high heel and then has her sisters hold Gothel in place as she dumps mud on her head, mocking her for trying to be human although her magic cannot hide what she really is. Seraphina, meanwhile, can only watch with horrified shock as Gothel is tormented. Isla also steals the key Gothel wears around her neck and then begins leaving with the other girls, except Seraphina who pauses and stares at Gothel regretfully before Isla prompts her to follow. Isla later leads her sisters, except Seraphina, to the tree nymphs' home using Gothel's key, where they kill them all with fire and axes.

After seeing the destruction that befell her home, Gothel returns to the ball, having revenge on Isla. Isla attempts to have the guards strike her down, but Gothel uses her magic to impale them with tree roots. As the attendees of the ball panic, Gothel wraps Isla with another tree root and, as she pleads for her life, snaps her neck, killing her immediately. 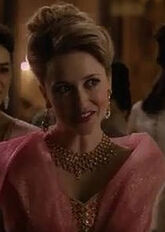 Isla is killed by Gothel.