Villains Wiki
Register
Don't have an account?
Sign In
Advertisement
in: Doctors and Scientists, Artificial Intelligence, Megaman Villains,
and 15 more

Isoc (in Japanese: アイゾック, Aizokku) is an intelligent Reploid scientist and a mysterious character from Mega Man X6.

He first appears after the opening stage, warning the populace of the threat of the Zero Nightmare and the Nightmare Phenomenon, and encouraging Reploids to join in the cause to obliterate the new virus. In reality, however, Isoc is actually working as a subordinate of Gate, the scientist responsible for the Nightmares.

If Zero defeats High Max in one of the secret areas, Isoc watches it and starts laughing uncontrollably. When Zero asks why he is laughing, Isoc responds that he cannot help it after seeing how powerful Zero is, pointing out that while X could not defeat High Max, Zero has done so easily. Zero then tries to attack Isoc, but Isoc raises his hand and nonchalantly generates a force field that immobilizes Zero, saying that he knowns him inside out and can capture him at any time. Isoc than retreats with High Max. Alia notes that Isoc's field has a timer to deactivate, and wonders why Isoc had the trouble to only trap Zero without harming him. In X's version of this scene, Isoc swears to personally destroy that "ancient piece of junk", indicating hatred towards X, but for the time being he withdraws with High Max. X tries to go after them, but listens to his commander Signas and makes a tactical retreat.

Isoc is not seen again until a cut scene sequence after Gate is defeated. The player character finds Isoc's body on the ground, and a slightly different scene plays out for each. If X defeated Gate, Alia informs him that Isoc's body is still functional, though he appears to be an empty shell similar to the Erasure incident in Mega Man Xtreme 2.

If Zero defeated Gate, Zero hears a voice emanating near Isoc's body, telling Zero to proceed and saying he believes Zero is the strongest robot. Whichever happens, the character realizes they have no time to check up on Isoc, and he immediately leaves to go after Sigma. Isoc is not seen again for the rest of the game, and his fate is unknown.

It is all but stated that Isoc is a robotic form of Dr. Wily, who is stated to still exist as an AI within the Maverick Virus in the X-series. This is made evident by how Isoc is interested in Zero and hates X, and if Zero defeats High Max, Isoc will be pleased that Zero was able to defeat a robot X was not. Isoc claimed he knew Zero "inside out" and this is supported by him easily immobilizing Zero through an unknown force, something no other character could do in the series.

Unlike all other reploids of the future and like Wily, Isoc uses the term, Robot instead of Reploid.

Isoc's Japanese voice actor, the late Takeshi Aono, is the same actor that voiced Dr. Wily in the Japanese titles and notably plays no other characters besides Wily and Isoc.

The official model sheet of Isoc notes he was designed after a certain scientist, giving another massive hint that Isoc is a vessel for Wily. 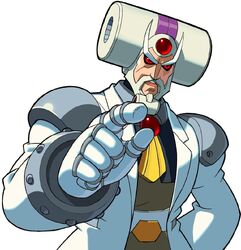