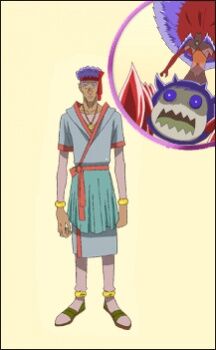 Isohgin is one of the "nightmare-duo" from Eternal that are said to be the best hunters there. He is the tall one of the two and mostly just repeats what Yadokhan says. Together, the two of them transform into a sea anemone on a hermit crab with Isohgin being the sea anemone on the top. His last episode was episode 38 along with his partner.

He was voiced by Yuichi Nagashima.

Yadokhan and Isohgin first appear in episode 25, after the girls have become Eternal. Bunbee should there see two tables instead of one, so now the two heads. As the girls try to Shiro commencer you run to live in Natts House, Isohgin and Yadokhan appear across the lake, commenting on how hot it is. When all come to buy, decide Yadokhan and Isohgin wait above the lake, not rush to defeat them. After returning, Nozomi think are customers and are about to attack but Shiro saves her. Yadokhan moves quickly and takes the compact to Shiro, preparing to leave.

But the girls are transformed and they use their arms to fight monstrous. However, they realize they do not need to fight against them and start to leave. That's when his light Bavaria used to loosen the compact, and Shiro's picks. Merge the two angry monster in shape and try to attack the girls but their attacks have no effect. Milky Rose Launches "Milky Rose Blizzard" and although they do not hurt as much effect as other villains. The duo decides to go for now. On a hot day, and Isohgin Bunbee sees Yadokhan with canes and they will tell you to go fishing the compact.

When they arrive, the Pretty Cure found the Princess Crepe, and they get to fish in the lake tranquillity. They are thirsty from the heat until they decide to go to Natts House. Nozomi customers think are thirsty until he sees them, and the duo has transformed a lobster caught in a Hoshina. While the monster deals with Pretty Cure, Shiro drops her compact, and transformed into a monster duo try catch but Rose gets it before. After discovering where the real lobster, Pretty Cure finished with it with the "Rainbow Rose Explosion" while Rose will launch the "Milky Rose Blizzard" but them to remember that this attack hurts them leave. On another occasion, taking advantage of Crepe unfolding his parting gift, will use that bond to create a Hoshina.

The monster gets to meet the Pretty Cure and catch Crepe while they get the compact. However, they will face Coco making Dream and help others go, the compact and Crepe recovering. When they launch their attack "Rainbow Rose Explosion" they leave knowing that such an attack will hurt them.

Retrieved from "https://villains.fandom.com/wiki/Isohgin?oldid=4201966"
Community content is available under CC-BY-SA unless otherwise noted.