It's a Bully is a supporting antagonist in Baldi's Basics In Education & Learning and the Field Trip demo.

He was voiced by the game's creator Micah "Mystman12" McGonigal.

It's a Bully was presumably brought in by the school because "every good school needs a good bully". Beyond that, however, it is unknown what It's a Bully's association with the school is, like if he is employed or brought there by some other means.

It's a Bully will stand at the end of hallways, blocking the entire way and preventing anyone from passing. If the player comes across It's a Bully and wants to pass, they must sacrifice an item in their inventory for It's a Bully to steal, so that he can move to a new hallway. This can result in the player being without items needed later in the game.

If the player does not have any items in their inventory, It's a Bully will mock them and not allow them to pass, forcing the player to seek out a different route and, in worse cases, risk capture by Baldi.

In the Field Trip demo, he will dress up as a tree and steal the player's sticks.

It's a Bully is a thuggish and brutal thief, though his motivations as to why he wants to steal are unclear. They may be because he is employed by the school to do so and serve as their "bully", or, more likely, simply because he enjoys being evil and annoying. He acts in a mocking and condescending manner, speaking in a faux polite and kind way. 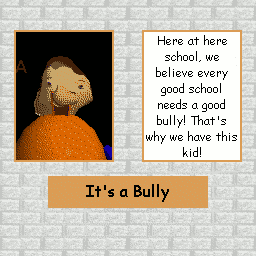 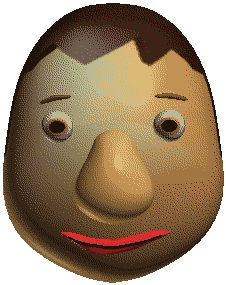 PlaceFace
Add a photo to this gallery 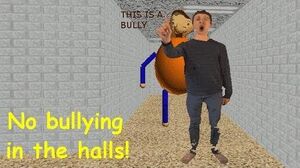 No bullying in the halls
Rare instances of It's a Bully being punished by Principal of the Thing.
Add a photo to this gallery

Retrieved from "https://villains.fandom.com/wiki/It%27s_a_Bully?oldid=2806039"
Community content is available under CC-BY-SA unless otherwise noted.