Murdering his friend Scratchy and other innocents.

Kill as many times as he wants.

Become president of USA (in the movie; both succeeded).

Itchy is the titular main antagonist in The Itchy & Scratchy Show, a parody of Tom and Jerry that play in The Simpsons world and the opening antagonist of the 2007 theatrical film The Simpsons Movie. He is a dangerous and sadistic mouse who loves torturing the heroic Scratchy, always killing him in some gruesome way without provocation in every episode.

He is voiced by Dan Castellaneta, who also voices Homer Simpson and various Simpsons characters.

Itchy is a parody of Jerry, his more brutal elements are based off another more obscure cat & mouse cartoon series, Herman & Katnip. In contrast to Jerry who usually engages in mutual comic mischief with Tom, Itchy is instead depicted as a demented serial killer who kills the innocent Scratchy for no reason outside of sadistic amusement. Even compared to Jerry at his worst, Itchy still shows himself as far more sadistic and evil.

Even in cartoons, where both are fighting, Itchy is, outside of the earliest cartoons, always portrayed as instigator and the evil side of the conflict. One such example being when Itchy and Scratchy are leading armies against each other, while Scratchy cries "freedom", Itchy cries "tyranny."

When Scratchy gets the advantage, Itchy is often shown as a coward who will take advantage of Scratchy's mercy towards him, by dishonorably backstabbing him.

While Scratchy is Itchy's favorite victim, Itchy kills others such as blowing up a dog general with a nuke, Itchy has even killed kids, murdering Scratchy's young children in many episodes like running over Scratchy Jr with a combine or blowing up Scratchy's daughter at her father's funeral.

In The Simpsons Movie, a movie of Itchy & Scratchy is being played, where both Itchy and Scratchy are astronauts who reached the Moon. While Scratchy says that he comes in peace for cats and mice everywhere, Itchy suddenly impales him with his flag pole several times, then whacks him with the pole and once Scratchy is down, Itchy cracks Scratchy's helmet, taking away his oxygen and leaves him on the Moon to die. When he goes back to Earth, he lies to the public that he did everything to save Scratchy, although he actually did the opposite, and ends up becoming president of USA. While looking into the Moon with a telescope, he sees that Scratchy is still alive and willing to tell everyone the truth. Itchy then shoots a salvo of rockets towards the Moon to kill Scratchy, succeeding at this murder.

Scratchy was at one point able to tie Itchy to several dynamite and Scratchy escaped in a taxi car. It is untold what actually happened, but according to a Simpsons book, it was said that Scratchy never killed Itchy even once although he nearly did, so it was especially possible that Itchy was able to survive the near-death experience.

In the comics based on Itchy & Scratchy, Itchy is if anything even more murderous and sadistic in tormenting Scratchy.

Itchy also appeared in the videogame The Simpsons Game, where he is one of the characters in the game of the day in Springfield: Grand Theft Scratchy (obvious parody of Grand Theft Auto: San Andreas). He is a common enemy in one of the missions, where it appears as gangster or pimp. 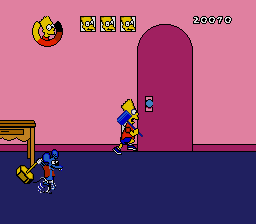 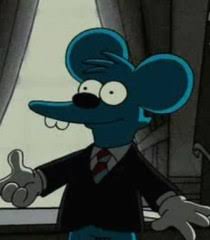 Itchy from The Simpsons Movie. 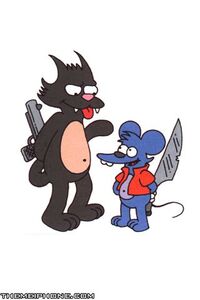 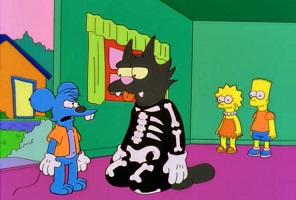 Let's teach them a lesson. 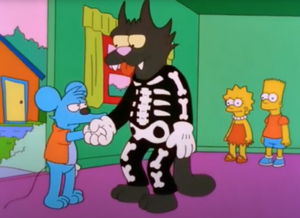 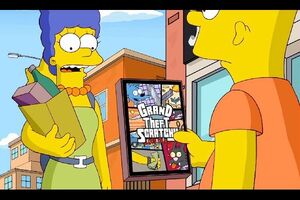