Wendigo
God of the Cold
The White Silence

Forcing people to sacrifice for him
Serial murder
Rape

Ithaqua (also known as the "Wind-Walker" or the "Wendigo") is a terrifying being that is one of the Great Old Ones and an antagonist in the Cthulhu Mythos genre by the late famed author H. P. Lovecraft. He is the titular main antagonist of August Derleth's short story of the same name, which was based on Algernon Blackwood's 1910 tale "The Wendigo".

He appears as a horrifying giant with a roughly human shape and glowing red eyes. He has been reported from as far north as the Arctic to the Sub-Arctic, where Native Americans first encountered him. He is believed to prowl the Arctic waste, hunting down unwary travelers and slaying them gruesomely, and is said to have inspired the Native American legend of the Wendigo and possibly the Yeti.

Ithaqua's cult is small, but he is greatly feared in the far north. Fearful denizens of Siberia and Alaska often leave sacrifices for Ithaqua — not as worship but as appeasement. Those who join his cult will gain the ability to be completely unaffected by cold. He often uses Shantaks, a dragon-like "lesser race", as servitors. A race of subhuman cannibals, the Gnophkehs, also worshiped him, along with Rhan-Tegoth and Aphoom Zhah.

Ithaqua figures prominently in Brian Lumley's Lovecraft-based Titus Crow series, ruling the ice-world of Borea. In Lumley's works, Ithaqua periodically treads the winds of space between Earth and Borea, bringing helpless victims back to Borea to worship him among its snowy wastes. He frequently attempts to reproduce with humanoid females, hoping to create offspring which can surpass his own limitations, imposed by the Elder Gods, and so help free the rest of the Great Old Ones. It is suggested that Ithaqua has the ulterior motive of desiring offspring to assuage his bitter loneliness, as he is the only one of his kind. None of his surviving offspring to date has accommodated him, all turning against him at some point.

Anders Fager's "The wish of the broken man" describes how 18th-century Scandinavian Saami worship "Ittakka" and calls up on him to create blizards. It also fingers Ittakka/Ithaqua as responsible for the 1718 Carolean Death March.

He is speculated to be the off-spring of Shub-Niggurath and Hastur. 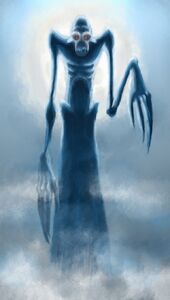 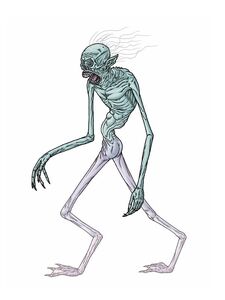