Eliminate the presence of Ghouls in Japan.

He is a Special Class Ghoul Investigator and is the current acting commander of the 11th Ward Specail Countermeasures Unit and is the Section Manager for Division II of the C.C.G. organization. Like all investigators, he has a hatred of ghouls and has been tasked with killing them.

He was voiced by Yūji Ueda in Japanese and Philip Weber in English.

Marude is a slim and slender male with short black hair that was much shorter from back when he was younger. Like all investigators, he wears a formal black suit with a white shirt underneath. He also wears black panrs, brown shoes, a purple tie, and has a golden button on the left side of his suit.

Marude takes his job very seriously and does not tolerate people who do not follow protocol. Despite this, he deeply cares for the well being of his subordinates as shown when he constantly scolds a young Arima for executing missons independently..

Maurde makes his first debut appearance in the Doves' Emergence Arc where he is at the funeral of Kureo Mado. He claims that Mado's death was of natural causes as he was obsessed with collecting quinques and it harmed his skills as an investigator. His remark is then rebuked by Kishou Arima for him speaking ill of the dead.

During the events of the arc, Marude is seen at a meeting where he informs the investigators about the resurgence of a mysterious organization known as the Aogiri Tree. He tells how the Aogiri Tree has gathered hundreds of ghouls together and is currently gaining more and more members to join. This causes the CCG to be put on high alert as this is the first time that such a large gathering of ghouls has occured. Marude is then placed as the commander of the 11th Ward Special Countermeasures Unit and leads the CCG Forces during the 11th Ward Battle. He spends most of the operation in the command vehicle but he does get out to use an MP5 and manages to gun down two Aogiri Members allowing the CCG Forces to advance further and orders them to charge in after Juuzou Suzuya steals his motorcycle and guns down the remaining Aogiri Soldiers defending the perimeter. During the operation, Shinohara and Iwao Kuroiwa run into Yoshimura and Marude orders them to fight with only "excellent yet expendable guys" and orders the rest to run off and head towards somewhere else. After the operation, he remarks the Arata Proto i disgust and sends in CCG Forces upon hearing from Arima of the Aogiri Tree assault on Cochlea.

Marude is seen where he is with the Chairman of the CCG, Tsuneyoshi Washuu. There, Washuu scolds Marude due to his slow progress with monitoring and stopping the Aogiri Tree. Afterwards, he is seen outside with Yoshitoki Washuu on a bench talking to him about a case of his that he is currently working on and need for information. He then says how he sent Investigator Koutarou Amon to interview the ghoul Donato Porpora for information about Aogiri. He's later seen with Hideyoshi after his subordinate, Katsuya Mabuchi, idneitified him as the one who sent the anoynymous tip about the 11th Ward Base and decides that he's not a threat. He then assigns Hide to work with Amon and Akira so he can be useful to the CCG while keeping an eye on him

Marude participates in the 20th Ward Operation as the vice commander serving under Yoshitoki Washuu. AT first, he's skeptical because of the past operation in the 11th Ward and the disasterous result that came from it but Yoshitoki reassures him that he did nothing wrong and accepts the position. He spends most of the operation inside the command vehicle with Mabuchi and Hide and is seen giving out orders to the various CCG Divisions on how to deal with both En and the Black Dobers. His second motorcycle is also destroyed during the operation by Juuzou and Koori Ui to use it against Yoshimura.

Three years later, Marude remains alive and well and is still active within the CCG. He's now the current actinv leader of the S3 Squad and leads the defense of a Quinque Steel Transport after Aogiri Tree forces launch an attack against it and is being lead by Tatara. After he manages to push off the Aogiri Forces, he then heads down towards the Auction Hall where he and his men go in and manage to elminiate much of the ghouls and end of the operation quicker. 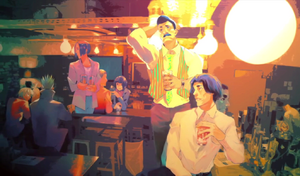 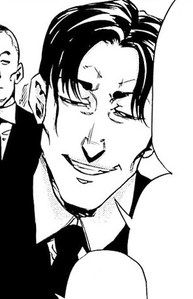 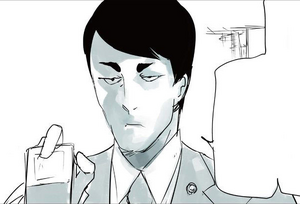 Marude in his younger days 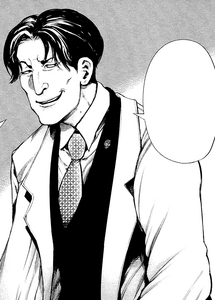 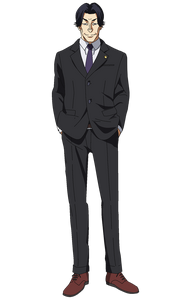 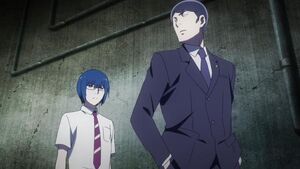 Young Marude with a teenage Arima 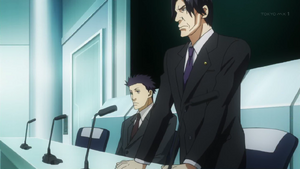 Marude at a CCG meeting 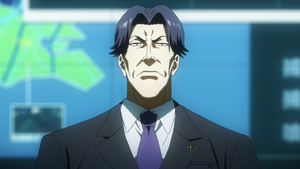 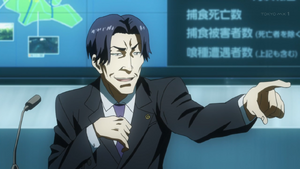