Ivan Von Shellshockstonberg, better known as Shellshock, is a villain from the video game Ratchet: Deadlocked.

Shellshock once fought in the Obani moon wars. Near the end of the war, his internal brain was destroyed by a missile and replaced by AI chip from a coffe machine, wich made him imprevious to pain, but not damage (and it gave him the ability to make great cappuccinos). Much later, he joined the illegal gladiator show known as DreadZone, where he became a high ranking gladiator and a member of The Exterminators, an elite fighting team. Before the protagonist, Ratchet's, unvoulentary arrival, Shellshock had taken control over planet Kronos and made a base of operations in a large cathedral. Later, when Ratchet arrived, Shellshock had killed a gladiator known as Plutonium Jones (with a 360 degrees Tomahawk finishing move) and much later, a pair of gladiators known as, the Omega Twins. Shellshock announced that the Twins screamed like teenage girls (which is ironic, as the Omega Twins WERE teenage girls). Later, he fought Ratchet outside his cathedral several times, retreating at the end of each battle. Eventually, Shellshock was cornered inside his cathedral and fought Ratchet in one final battle. At the end of the battle, Shellshock was presumably killed by Ratchet.

As with many Ratchet & Clank characters, Shellshock has large arsenal of weapons. The arsenal consists of; his powerful blaster, missile launcher built into his chest, shoulder mounted cannons that fire homing mines, his mentioned, but unseen, 360 degrees Tomahawk Finishing move and of course, brute strength. 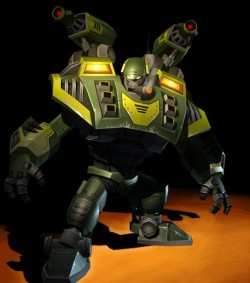 Retrieved from "https://villains.fandom.com/wiki/Ivan_%27Shellshock%27_Von_Shellshocktonberg?oldid=3703348"
Community content is available under CC-BY-SA unless otherwise noted.