No information
Ivan is one of Akihiro Kurata's henchmen. He can Bio-Hybrid digivolve into BioStegomon and BioSupinomon. He also has a crush on Yoshi.

He is voiced by Takanori Hoshino in Japanese Version and Christopher Darga in English Version.

Ivan first appeared along with Nanami when they encountered Miki and Megumi and easily defeated them. They then attacked the DATS during their adventure to the Digital World to stop Kurata from murdering more Digimon. Ivan, along with Nanami and Kouki easily defeated the DATS Digimon partners (except Falcomon, who was injured by them), but Commander Sampson and his Digimon partner, Kudamon (who Digivolved to Chirinmon) confronts the trio while the DATS team had time to escape and enter the Digital World.

Ivan, along with Nanami and Kouki survived their battle with Commander Sampson, and arrived at Cherrymon's place, where he took care of the injured Digimon. Ivan attempts to date with Yoshi, but she states that she'll pass. The DATS team fought the Bio-Hybrid trio again, but were still no match for them. Marcus, Yoshi, and Thomas suddenly unlock a mystrious power to their Digivices and their Digimon partners defeated Ivan, Kouki, and Nanami, forcing them to retreat into a Digital Gate. While BanchoLeomon trains the DATS team to unlock their hidden powers and fix their Digivices, Ivan, Kouki, and Nanami in their Bio-Hybrid forms attacked their Digimon partners in Rookie forms, badly torturing and beating them. After Marcus unlocks his Mega power, Agumon, Gaomon, and Lalamon became their Mega forms for the first time and defeated the Bio-Hybrid trio.

Kurata then upgraded the Bio-Hybrid forms on Ivan, along with Kouki and Nanami. Ivan then finds Yoshi again, but Yoshi still refuses to date him. Ivan then becomes BioSupinomon and attacks Rosemon. After being defeated by Rosemon, Ivan lost his powers and Yoshi found a picture of him and his family, and Ivan explains why he worked for Kurata because he wanted money for his family.

During the final episode of Digimon Data Squad, Ivan, along with his family, made a cameo appearence, where they gave their data during the final battle against King Drasil. 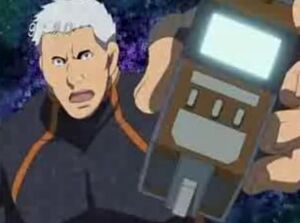