Member of the Augmented Rights Coalition

End the oppression of augmented people and resort civil rights to transhumans.

Ivan Berk is a character and the secondary antagonist of the dystopian science fiction shooter Deus Ex: Mankind Divided. Despite featuring prominently in trailers before the game's release, he only appears in one scene in the beginning of the game.

He is an augmented individual who is responsible for the bombing of the Ruzica Station in Prague and is a member of the Augmented Rights Coalition. He seems to be a follower of Victor Marchenko and is part of his terrorist inner circle faction.

He was voiced by Scott Humphrey.

Ivan is very young being at 27 and has the appearance of a young man. He's very scruffy looking and wears a grey and yellow jacked over his whole body. He has a dirty beard and augmented arm and legs.

Not much is known about Ivan as of yet but what is known is that he was born in 2002 in the Czech Republic in Central Europe. He appears to have gotten augmentations primarily on his legs most likely from a tragic incident or disease. He was probably infected with the computer virus that started the Aug Incident and suffered the aftermath.

By the year 2029, Ivan like many others, have been forced into a ghetto known as Golem City or the Utulek Station officially. He is segregated fromt he rest of Czech society as a result of effects of the Aug Incident and eventually joined ARC to get his civil rights back. He was eventually attracted to the radical and militaristic ideology and preaching of Marchenko and joined his terrorist splinter-cell faction. In Prague, he's seen walking away and covering himself where a bomb goes off and the station is destroyed after he gets out. Berk is killed in the explosion. 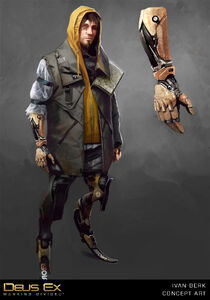 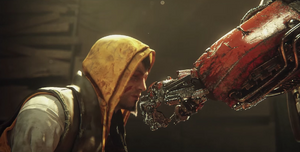 Add a photo to this gallery
Retrieved from "https://villains.fandom.com/wiki/Ivan_Berk?oldid=3725640"
Community content is available under CC-BY-SA unless otherwise noted.