Break (or kill) Rocky Balboa at any cost (partially succeeded).

Ivan Drago (Russian: Иван Драго) is a major antagonist in the Rocky film series. He appears as the main antagonist of both the 1985 film Rocky IV, and the 2018 film Creed II. He was a former Soviet military captain and amateur boxing champion bent on defeating Rocky Balboa.

He was portrayed by Dolph Lundgren.

Drago was a boxing champion from Russia (part of the Soviet Union at the time) and a captain in the Soviet military, known to have superhuman strength that allowed him to rise himself into the ranks of Soviet boxing history. His wife Ludmilla Drago acted as his spokesperson during interviews and press conferences, which Drago's manager Nicolai Koloff also used to run down America and boast of Soviet superiority in propagandistic fashion.

Although Drago does not physically appear in the film, it is revealed that his blows left Rocky with brain damage (specifically diagnosed as cavum septi pellucidi (CSP)), causing him to mistake people, see visions and various other things. As such, Rocky is forced to retire from boxing to prevent any further damage while Drago is left as a complete disgrace by the entire Soviet community for his loss. During his fight with Tommy Gunn arranged by George Washington Duke, Rocky witnesses a vision of Drago killing Apollo as he believes he is about to suffer the same fate at Tommy's hands until he was inspired by a vision of his old trainer Mickey telling him to get up and finish the fight by defeating both Tommy and Duke.

Despite his ruthlessness, Drago did love and care for his son Viktor, even willing to spare him a humiliating defeat by literally throwing in the towel. He is even more disgusted towards Ludmilla for abandoning him and Viktor when the latter was an infant. 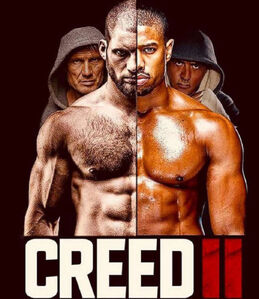 Drago and Rocky behind Viktor and Adonis in a poster for Creed II.
Add a photo to this gallery

Retrieved from "https://villains.fandom.com/wiki/Ivan_Drago?oldid=3239413"
Community content is available under CC-BY-SA unless otherwise noted.