The Soul of the Plot

Typesetter for the Baltimore Patriot

To force Poe into writing a story about the murders, the kidnapping, and investigation. (succeeded).

To get away with his crimes and continue his work with Jules Verne (failed).

Ivan Reynolds is the main antagonist of the 2012 crime thriller film The Raven. He was the typesetter for the local newspaper who moonlighted as a serial killer with a modus operandi inspired by stories from Edgar Allan Poe.

He was portrayed by Sam Hazeldine.

On the surface, Ivan appears to be meek and humble. When he informs Poe of bad news, he gives him a bottle of alcohol, and later Ivan objects to Poe offering his life for Emily's. However, this appears to be a facade, as when Ivan reveals his true colors he acts like a deluded narcissist with no remorse for any of the people he murdered or any of the mental torment he inflicted upon Poe, even going as far to brag about his severed tongue clue, claiming it was his idea and quite a subtle metaphor. He also seems to be a bit sadistic, shown when he laughs at and taunts Emily through the hole of her casket.

Late one night in Baltimore, Maryland, screams are heard coming from a hotel. The Baltimore police respond and hurry to the scene, but someone locks the door from the inside. When they break it down, they only find two corpses, one of a woman lying on the floor, and one of a girl stuffed in the chimney. The lead detective, Emmett Fields arrives to the scene and manages to find that the nails in the window are actually a lock mechanism which opens the window and was how the murderer escaped. However the crime seems all too familiar for Detective Fields. After a bit of research, Fields discovers the double murder was exactly as described in one of Edgar Allan Poe's stories. With this information, they bring Poe in for questioning.

Meanwhile, the murderer strikes again when he abducts one of Poe's rivals and tortures him with various tools, before killing him with a Pendulum. When the police discover the body, they allow Poe on to the scene, viewing him as a valuable asset to the investigation. Fields shows him a red mask that the killer put over the corpse's face and Poe is able to deduce that the killer is going to strike again at Charles Hamilton's ball.

The next night at Hamilton's ball, a man dressed as a skeleton rides in on a horse. He is shot by Hamilton, but it turns out the man was just a messenger sent by the real killer to deliver a note. While everyone is distracted, the killer abducts Charles's daughter and Poe's future wife, Emily Hamilton. The note left by the killer challenges Poe to write a new story for the papers, as well as challenges him to use the clues they will provide with the murder victims to find him, using Emily as leverage.

A group of doctors find the next body locked in a trunk with a raven, and after analyzing the blood, Fields discovers it's stage blood and the woman was an actress from the Imperial Theatre. Poe and the police go to the theatre and interrupt a performance, where they find that one of the stagehands is missing. Fields investigates in the basement while Poe sees a man walking up on the catwalk. He climbs the ladder and gives chase, but the man drops one of the backdrops and it breaks part of the catwalk and knocks Poe off. Luckily, he manages to grab onto the ledge, but drops his pistol which ends up firing after hitting the ground. Fields and Poe reconvene on stage, and go to investigate Maurice's locker where they find a box with a human tongue and a feather inside.

Emily tries to use a wire from her dress to dig through the box, but the killer catches her and mocks her through the hole before shoveling more dirt onto the casket.

That night, Poe helps Fields figure out the clue, and the police gather in the underground tunnels of Baltimore to search for the killer and freshly laid bricks. After discovering a set of bricks that are different from the others, they dig through with a pickaxe and find the corpse of the missing stagehand dressed to look like Emily. Meanwhile, Fields chases the killer through the tunnels, but he manages to escape out a manhole. While examining Maurice's corpse, they find a pocket watch inside his mouth and an X carved into his back. Realizing that the killer is giving them coordinates, they ask for assistance from Charles Hamilton in finding the location. However the location (St. Croix) is too far away for the killer to have transported her there. Poe figures out that the clue is actually pointing them to the Holy Cross Church.

They proceed to the Holy Cross Church where the doors are found to be locked. As PC John Cantrell is scoping out the back, the killer jumps down from the cathedral and knifes him in the throat. When Fields finds him bleeding out and tries to tend to his associate's wounds, the killer shoots him in the shoulder from the seat of his horse. Poe chases after the killer on horseback, but the fog and trees allow him to slip away. The killer fires a bullet which hits the tree and scares the horse, causing it to fling Poe off. With no horse, Poe walks back to the church and Hamilton informs him that they found an empty grave with Emily's name on it.

As Emily breaks through the casket and tries to escape, the killer subdues her with chloroform. Meanwhile with the final day being up, Poe writes another story intending to plea with the killer to take his life and spare Emily's. Not too long after the paper is published he receives a note congratulating him on another masterpiece. With the note, he is able to figure out the killer works at Baltimore Patriot. Fields, after waking up from surgery is also able to figure this out when he spills a bottle of ink while searching for his gun.

Poe confronts his boss, Henry Maddux with a gun at the Baltimore Patriot, however he finds Henry dead with a note claiming he's getting warmer. He goes into the main room where Ivan is waiting for him. Ivan pours Poe and himself a shot of alcohol. After they both take the shot, Ivan begins to talk, telling Poe of his obsession and claims of being an artist like Poe. But, Poe isn't in the mood for talking and fires off a warning shot near Ivan's head. Ivan convinces Poe to hand him the gun and pours him a shot of poison, all while opening up about his delusions.

After Poe drinks the poison, Ivan reveals his intentions to do something similar with Jules Verne and leaves, giving him the last clue, a quote from the Tell-Tale Heart. Poe manages to dig through the floorboards, find Ivan's secret lair, break open Emily's casket, carry her to safety, and walk to a park bench where an old man asks if he's okay. Poe tells the old man to tell Fields that the killer's last name is Reynolds, before finally succumbing to the poison. Luckily Fields is able to figure out what Poe meant and he tracks down Ivan to Paris. When Ivan gets into a carriage, Fields is there waiting for him. Ivan attempts to attack Fields, but is presumably shot and killed.

Ivan informing Poe about his review not being published.

The note hinting at The Masque of the Red Death, found inside the mask.

Poe spots Ivan up on the catwalk.

The clue hinting at The Facts in the Case of M. Valdemar.

Ivan taunts Emily through the hole in her casket.

Ivan hiding on the rooftop of the Holy Cross Church.

Ivan jumps down and kills Cantrell.

Ivan recapturing Emily after she escapes.

Ivan dumps poison into a shot glass for Poe.

After escaping Baltimore and traveling to Paris, Ivan is shocked to find Fields waiting for him in his carriage.
Add a photo to this gallery 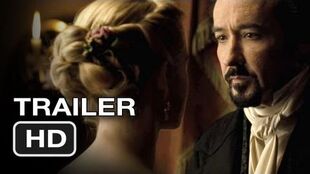 Retrieved from "https://villains.fandom.com/wiki/Ivan_Reynolds?oldid=3703362"
Community content is available under CC-BY-SA unless otherwise noted.