Villains Wiki
Register
Don't have an account?
Sign In
Advertisement
in: Mature, Resident Evil Villains, Partners in Crime,
and 23 more

Bio-Engineered Guardians
Ivans are the secondary antagonists in the video game Resident Evil: The Umbrella Chronicles. They are a pair of T-103 Tyrants specifically engineered to serve as the bodyguards of Sergei Vladimir.

Ivans - AKA T-103 - are engineered versions of the T-103 Tyrant. Unlike other Tyrants, Ivans are obedient and are able to assimilate into human society. They serve as the loyal bodyguards to Sergei Vladimir.

The Ivans wear protective white coats and black gloves. They also wear white boots with black shoe laces. Each Ivan wears unique sunglasses. They are distinguishable by the color of their sunglasses. One of the Ivans wears red sunglasses whereas the other one wears blue sunglasses.

In 1996, Albert Wesker was assigned to protect the Umbrella research center. He failed and attempted to leave after swiping data from the facility's super computer. Wesker was confronted by Vladimir at a tunnel containing a derailed train. Vladimir ordered Wesker to stop but Wesker disobeyed the order given to him. As punishment for Wesker's disobedience and failure, Sergei dispatched the Ivan to kill Wesker. During the fight, there was an explosion that distracted Ivan. Wesker managed to escape by using the distraction as an opportunity.

Later, Sergei with the Ivan was seen leaving the facility. The Ivan was carrying the T.A.L.O.S computer. The duo were approached by a pack of Cerberuses. Ivan easily killed all of the Cerberuses.

In 2003, Wesker invaded a Russian facility in an attempt to steal data from the Red Queen computer. He was approached by Sergei and both of the Ivans. Sergei ordered the Ivans to fight and kill Wesker. This time, Wesker used his new superhuman abilities in the fight. He managed to knock both of the Ivans unconscious before he fled from the Russian facility. Their further fate is unknown. 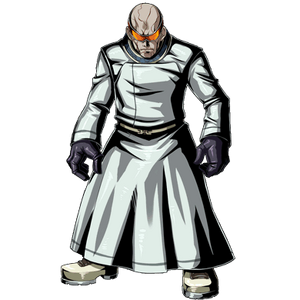 The orange Ivan in Minna to BIOHAZARD Clan Master.