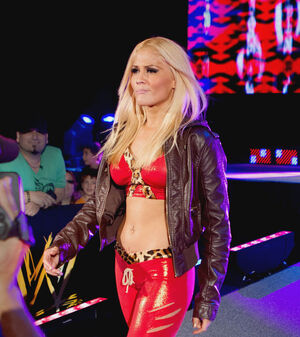 Sofia debuted in 2011 and formed the villainous "Anti-Diva Army" with Paige. In her role, Sofia feuded with Divas such as Kaitlyn, Caylee Turner, and Audrey Marie, while she and Paige aligned with top villainess Raquel Diaz on numerous occasions. On the final edition of FCW TV (before they became NXT), Sofia turned against Paige and caused her to lose a match to Audrey Marie. A possible motive could have been that Sofia was jealous that Paige was chosen over her to face Audrey.

On an early edition of the modified NXT program on July 4, 2012, the evil Sofia defeated her former Anti-Diva partner, Paige, in a singles match. Sofia actually appeared as a babyface and defeated Natalya via count-out, but in her last match in WWE, Sofia turned villainous en route to losing against Tamina Snuka. Sofia was released by WWE in August 2012. Her release came before her match against Tamina aired.

After her tenure with WWE ended, Ivelisse returned to the independent circuit. She debuted at Shine Wrestling in December 2012 and was defeated by Athena, but after the match, she attacked Athena to establish herself as a vicious heel. Ivelisse joined the Valkyrie faction in January 2013, and has racked up various wins since then, with her lone defeat being against Mia Yim in the SHINE Championship Tournament. SHINE VP Lexie Fyfe named Ivelisse the #1 Contender for the SHINE Championship, which was held by her faction leader, Rain, after SHINE 15 ended. At SHINE 16 on January 24, 2014, Ivelisse defeated Rain to capture the SHINE Championship, and was attacked by Valkyrie after the match ended, turning Ivelisse face.

Ivelisse held the title for nearly 10 months until she lost the title to Mia Yim on November 16 in China. Since then, Ivelisse has displayed a villainous persona due to her bitterness over losing the title, going as far as to interfere in Mia's title match against Nevaeh and attacking Lexie Fyfe. Ivelisse finally received her return match against current champion Santana Garrett, but she was defeated.

Ivelisse's villainous traits include her fiery temper and her vicious aggression. Her actions against Paige in WWE also show her to be self-serving and traitorous.