Destroy Sonic the Hedgehog and almost anyone else who stands in his way.
Get revenge on Dr. Robotnik for banishing him to the Void (SatAM; all failed).

Ixis Naugus is an antagonist who appears in the SatAM cartoon and Archie Comic versions of Sonic the Hedgehog as an evil wizard. Naugus was a surviving member of the Order of Ixis, an ancient organisation founded by Mammoth Mogul. After the comic continuity was rewritten by the Super Genesis Wave, the wizard was renamed Walter Naugus and became among the last of the magical troll race. Naugus has a slow raspy voice which can be heard when he speaks.

He was voiced by Michael Bell who also voiced the Bunny in The Grim Adventures of Billy & Mandy.

After the Worlds Collide event in the Archie Sonic comics, The villian's name was changed to Walter Naugus and is no longer a hybrid creature. Instead, he is one of the last members of the Troll race, and his appearance now sports a tail.

In the past, Naugus discovered the Void, an alternative dimension full of crystals. He later collaborated with Dr. Robotnik and Snively, who created a portal for him into Void. One day, Naugus decided to head into the Void through the portal and he ordered Robotnik to pull him out after an hour. As a warning in case he wanted to betray him, Naugus temporarily turned Robotnik's head into that of a crow's, much to Snivley's amusement. Even so, after Naugus got dragged into the Void by the portal, Robotnik sealed the portal behind him, leaving Naugus trapped in the Void. Over the years, Naugus plotted to get out of the Void. Over a decade after his imprisonment, Naugus opened a portal into the Void in the middle of the Great Unknown which nearly pulled in Sonic. Although Sonic managed to escape the portal, Naugus left behind an artifact on the other side of the portal that Sonic found and took with him. From within the Void, Naugus watched Sonic with interest, whose speed would allow him to get out of the Void. To this end, Naugus planned to pull Sonic into the Void with the artifact the hedgehog had picked up.

When the heroes found him and fell for his disguise, Naugus told Sonic that he needed his help and that he needed to get out of the Void as soon as possible. Showing no hesitation, Sonic grabbed the disguised Naugus and ran through a portal out of the Void and into the Great Unknown with him. There, they faced the forces of Dr. Robotnik. Soon after, Naugus shed his disguise and crystallized Sonic from the neck down so that he would not attack him.

After a while, he turned his attention to a Surveillance Orb sent by Dr. Robotnik. After greeting the doctor over the camera, Naugus released Sonic and let him return to the Void to get his friends out of there. Naugus himself then forced Robotnik to meet him. The terrified doctor thus falls on his knees and assures Naugus that he did not betray him. However, Naugus is not buying Robotnik's story and proceeds to turn his head into that of a slug's, followed by a monkey's, a crow's, and finally a pig's. Seeing this, Snively begins to weep from laugher until he falls down from his chair.

After a cosmic event known as the Super Genesis Wave, Naugus’ history and abilities were permanently altered. In this continuity, Naugus has the power to shapeshift and can control the minds of others. He is still able to perform crystalline magic, which has now been named “Crystalmancy”, and can use it to crystallize almost anything he wishes. However, Naugus’ control over crystallized technology or those brainwashed will only remain if he stays within a certain range. It is unknown if Naugus had retained any of his other powers after the Super Genesis Wave. 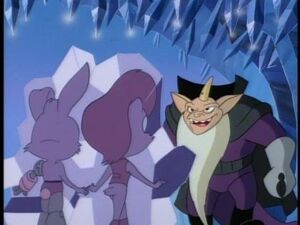 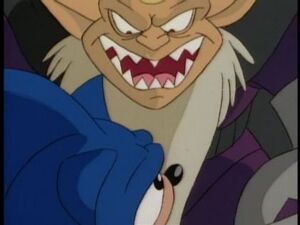 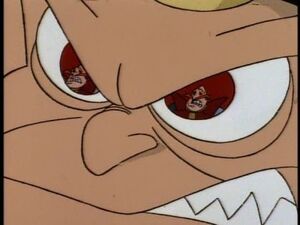 Naugus glaring angrily at Robotnik for traping him in the Void. 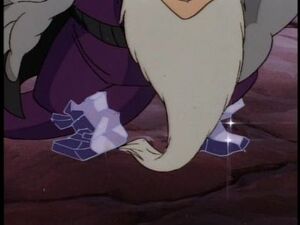 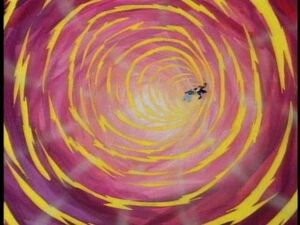 Naugus and King Acorn returning to The Void, while promising Robotnik that he will return and have his revenge. 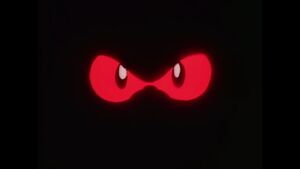 Naugus's eyes.
Add a photo to this gallery

Retrieved from "https://villains.fandom.com/wiki/Ixis_Naugus?oldid=3618143"
Community content is available under CC-BY-SA unless otherwise noted.