Wipe out the "inverts".

Claim Patema as his own or kill her.
Maintain his rule over Aiga.

Izamura is the main antagonist of the 2013 Japanese animated science fiction film Patema Inverted. He is the leader of the totalitarian nation of Aiga.

He was voiced by Takaya Hashi in the Japanese version, and Richard Epcar in the English dubbed version.

In the past, scientists attempted to harvest the Earth's gravity for energy, resulting in the devastation of the surface and a reverse of the gravity field, causing much of everyone and everything to be sent floating into the sky. As a result, all surviving "inverts" move underground so they will not float into the sky. Izamura rules over the Aiga society, keeping its citizens under constant monitoring and forbidding them from looking at the sky. Unknown to the citizens of Aiga, it is actually the Aigans who are the true inverts, a fact which Izamura keeps hidden from the citizens.

At some point, a boy, Age's, father crafted a flying machine with an invert named Lagos. Izamura, however, had Age's father assassinated and Lagos imprisoned, where he later died. Years later, another invert, Patema, arrives in Aiga and meets Age. The two learn that by gripping each other, they can reduce the rate from which Age can fall. Izamura, discovering Patema with his numerous video cameras, orders for her to be captured. He reprimands Age and takes Patema to a giant governing tower, trying to force her to confess where the other inverts are located. He threatens to release Patema into the sky, and then imprisons her in the top floor with only a plate of glass separating her from the sky.

When Age returns to rescue Patema, Izamura orders his assistant Jaku to execute him. Jaku hesitates, allowing Age and Patema to escape. Because Patema has an inverted weight attached to her leg, she and Age float into the sky in front of everyone. Izamura tells the public that Age had died in an accident. Meanwhile, Jaku discovers that Izamura had ordered Age's father killed. Patema and Age return in Age's father's flying craft and drift into the large hole leading to the other inverts, but Izamura follows them.

Izamura plans to have the inverts killed, but Jaku turns against him. Izamura attempts to shoot Jaku, only for Patema's friend Porta to attack him, sending them onto the craft that plunges to the bottom of the shaft. Izamura shoots Age in the leg and nearly kills Porta, but the floor of the shaft shatters, revealing the sky below it and exposing Izamura and the Aigans as the true inverts. Izamura "falls" into the sky, attempting to pull Patema with him, but is forced to let go when the remains of the flying craft collide with him, sending him into the sky to his death. 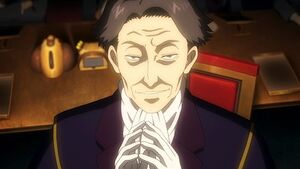 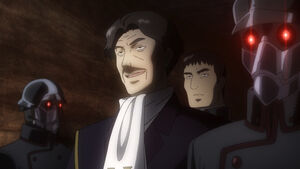 Izamura and his troops.
Add a photo to this gallery
Retrieved from "https://villains.fandom.com/wiki/Izamura?oldid=3703376"
Community content is available under CC-BY-SA unless otherwise noted.