Take over the leadership of Kibaoni Army Corps

The Izayoi Way Ninja Army Corp members are summoned by Kyuemon through the use of scrolls and all utilize Izayoi Style Shuriken. However, they were in reality the Secret Guards of the Kibaoni Army whom Kyuemon had usurped for his own machinations. They share teeth-clenched teamwork with Kibaoni Army Corps.

There are five ninja disciples in the corps, with the first four each possessed a Core Gear that survived their deaths and were taken by Kyuemon to complete his own Mecha.

The organization eventually meets its defeat after Kyuemon's defeat, the death of its one last remaining disciple, and the demise of Gengetsu Kibaoni. 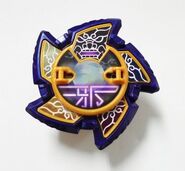