Member of the Uchiha clan

Training with his brother

Izuna Uchiha (in Japanese: うちはイズナ, Uchiha Izuna) was an antagonist in the manga/anime series Naruto. He was a member of the Uchiha clan and Madara Uchiha's brother.

He was voiced by Yō Tokinaga in the Japanese version, and Nicolas Roye in the English dubbed version.

Before the era of ninja villages, Izuna was one of the five sons born to Tajima Uchiha. However, three of his brothers perished at the hands of the Senju, leaving the second eldest Izuna and his oldest brother Madara. Alongside Madara, Izuna was declared one of the most gifted members of the Uchiha. Izuna often competed with his brother as training.  As a child growing up during the war-torn era, Izuna once accompanied his father on a mission to take out Hashirama Senju, whom Madara — albeit unknowingly — had been meeting. Once there, Izuna and his father were confronted by Butsuma Senju and Tobirama Senju, the latter of whom he acknowledged by name.

As Izuna clashed with Tobirama, unbeknownst to him, Butsuma had launched an attack at him, hoping to take him down and gain an advantage at defeating his equal Tajima. This attack, however, was deflected by his brother Madara who had interfered between the two sides along with Hashirama. Izuna later showed surprised when Madara noted that Hashirama was stronger than he was, but was later flattered to see that his brother had awakened his Sharingan.

As the battles between the two clans went on, Izuna unlocked his own Sharingan and became one of the first two Uchiha to unlock the Mangekyō Sharingan, alongside his older brother. With their newly obtained power, the two brothers became the head of the clan, with Madara becoming its leader. During a battle with Tobirama, Izuna was severely injured by Tobirama's technique. With Madara quickly rushing to help Izuna, Hashirama pleaded with Madara to come to stop the war. Seeing his brother begin to consider this offer, Izuna told his brother not to fall for their deception, ultimately making Madara retreat with Izuna.

When Madara later returned to the battlefield, he revealed that the injury inflicted on Izuna was fatal. At the last moments of his life, the dying Izuna had given Madara his eyes so his brother could obtain the Eternal Mangekyō Sharingan to protect their clan from its growing number of enemies and the Senju. Because of the blindness caused by overuse of a Mangekyō Sharingan, many people came to believe that Madara took Izuna's eyes by force to regain his sight.

Izuna Uchiha was a harmonic and devoted person. He also appeared to be very competitive with his brother, Madara, in terms of skill as they would often spar with one another in an attempt to hone these skills. Izuna looked up to Madara greatly and was even in disbelief when as children, Madara admitted to being weaker than Hashirama. Likewise, Izuna was elated when Madara awakened his Sharingan shortly after. As he grew older, Izuna's love for his clan increased and he fought with his heart to protect it. He soon came to share his clan's opinion regarding the Senju clan, even asking Madara, while severely wounded, not to fall for Hashirama's "false" truce proposals. He looked up to his older brother and was so close to Madara that he even gave him his eyes as a dying gift as a means of ensuring that Madara will be able to better protect the clan's future.

Due to being the victim to the Curse of Hatred like many of the other Uchiha, Izuna was not able to see the greater good outside of his clan. When Hashirama offered to have their clans join forces to end the wars and heavy blood-shed, Izuna went to his grave telling his brother not to trust the Senju as it would mean the demise of their own clan, despite the Senju clearly outclassing the Uchiha.

Izuna was noted to be of prodigious talent, even by the battle-adept Uchiha clan's standards, and was one of the most powerful Uchiha in history being his brother Madara's equal before Madara acquired the Eternal Mangekyō Sharingan. He and his brother competed daily to hone their skills. Both of them had exceptionally strong chakra, even for Uchiha members. His prowess allowed him to fight on equal ground with Tobirama Senju — a shinobi renown as one of the strongest and the fastest of his time.

In the anime, Izuna showed proficient skill in Fire Release, able to perform his clan's signature Great Fireball Technique with enough power to disperse a Water Dragon Bullet Technique. Izuna possessed overflowing talent in kenjutsu wielding a sword when seen in battle. He could proficiently wield it backhanded or normal grip, letting him attack in different patterns.

Izuna unlocked and became proficient with his Sharingan at a very youthful age; around the same time as Madara. His prowess with the dōjutsu was such that his clan soon perceived his advanced levels of abilities even amongst their battle-excelling clan. With it, Izuna acquired access to the dōjutsu's various generic abilities, including seeing events with advanced detail and from it easily dodging most hostile attacks.

Along with his brother, Izuna became the first Uchiha to unlock the Mangekyō Sharingan. Its design had three straight bars expanding out from his enlarged pupil. While never seen using this form in battle or any of its acquired techniques, Izuna's new ocular abilities quickly advanced him along with Madara to leadership roles within the clan. 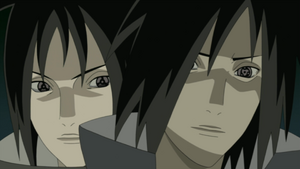 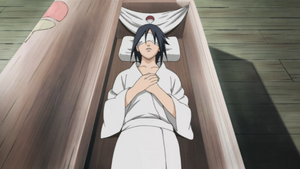 Izuna before being buried.
Add a photo to this gallery

Retrieved from "https://villains.fandom.com/wiki/Izuna_Uchiha?oldid=3035092"
Community content is available under CC-BY-SA unless otherwise noted.