Use of hand gun

Observe whether hope or despair wins.
Upload a virus into Neo World Program (both succeeded).

He was voiced by Minami Takayama in Japanese and by Johnny Yong Bosch and (temporarily) Micah Solusod in English. In the stage production, he was portrayed by Ryūsei Yokohama.

Izuru's dark black hair is wild, long, and flowing, adding to the chaotic aura that surrounds him. His red eyes are piercing but emotionless. His expression is constantly bored; the only time he shows emotion is when Chiaki dies at his feet, but it's merely a remnant of Hajime crying for her. He wears a black suit and tie with black dress shoes.

Due to the drastic changes that the operations made to turn Hajime into Izuru, his original personality was suppressed so as to not interfere with his talent cultivation. Izuru appears as a cold and emotionless person who finds everything and everyone boring, though he does talk and express in a more polite way than his alternate identity in the Japanese version. He expresses a disgust for talentless people, because his "teachers" taught him that they are just parasites who oppose and leech off of those with talent instead of acknowledging their "true superiors". He believes that such people brought the world to a deadlock and created a world that has stopped evolving, and that the only way to improve this is a certain form of "selection".

Izuru enjoys unpredictability, which can make him feel more emotional, but he also tends to quickly grow bored because his supernatural analytical skills and intuition cause him to quickly predict things with surprising accuracy. This is seen in Chapter 0 of Danganronpa 2, as he is visibly excited by the rocking of the boat only to find it boring a few seconds later (he is also so focused on the rocking that he doesn't even realize he's on a boat, at first). Notably, he appears aware that he is only being used and his talents are "leeched off" to create hope he finds boring and predictable, but he has no motivation to change his situation. Junko eventually used this to manipulate him, as she told him to strive for the unknown of despair and chaos, finally motivating him to strive to actively free himself from the boredom.

In Danganronpa 3, Izuru is shown to be quite silent at times, acting responsively only when he finds it necessary. Instead, he often observes other people and situations silently with no changes in his facial expressions, often without being noticed by other people. He appears to have no interest in humor nor romantic approaches from other people, as he often doesn't even look at other people during those moments, and ignores such behavior from Junko. He never laughs nor smiles, and generally doesn't change his expressions much. However, while he lacks sympathy for others, he differs from Junko in that he does not enjoy the suffering of others, and thus mostly hurts or kills other people only for self-defense. While he usually has no interest nor care for other people, the only exception is Chiaki due to his past life, as Hajime's attachment to her made him shed tears (though he didn't appear to know why) and she is the only person he subconsciously cared for as shown when he kept her hairpin and mourned for her after the Tragedy.

In Danganronpa Another Episode, Izuru appears completely silent and seemingly unemotional. However, he rips the hard drives from Shirokuma and Kurokuma in a rather aggressive and seemingly annoyed manner, which is even commented on by the Alter Ego Junko. Similarly, he appears unusually bitter and vengeful while talking about Junko during Chapter 0 of the second game, because she used him in the past. It's also possible that he is subconsciously angry because she killed Chiaki.

After the Neo World Program, the person who went in as Izuru started to identify as Hajime. He still expresses boredom to some things, but his personality is mostly like Hajime's, as he has an easier time feeling emotions and is more proactive.

Named after the founder of Hope's Peak Acadamy, Izuru Kamukura is an alternate identity of Hajime Hinata, a talentless student whose obsession with Hope's Peak Academy led him to be used in the "Ultimate Hope Project", which wiped his original personality and replaced it with the constructed persona of Izuru Kamukura.

Izuru met up with Junko Enoshima in his cell where she promised to spread despair to the world in order to make it interesting. Izuru took up the offer and assist Junko's plan. He was invited by Junko to observe the Tragedy of Hope's Peak without any participants noticing, he was later framed for responsible for the Tragedy by Junko in order sow chaos and dissent in Hope's Peak and eventually despair to the world. He briefly confront Nagito and Chiaki and shot Nagito in the process.

He soon witness Chaiki's death who refer Izuru as Hajime, this led Izuru unconsciously crying and a change in Izuru mindset. Izuru soon left Hope Peak Academy and observe the Tragedy. Unable to decide hope or despair is unpredictable, he decide to use Junko’s plan of uploading virus into the Neo World Program to test which is unpredictable.

He is briefly seen in the epilogue where wheelbarrowed Shirokuma and Kurokuma which are part of Junko's AI, he soon took the AI parts and left Towa City.

He seen in Chapter 0 where he observe the rocking boat and had a conversation with Nagito Komaeda and mentioned his plan to Nagito.

In Chapter 6, Hajime fell into Despair after he realized that he was turned into Izuru, the person responsible for uploading Junko's AI into the Neo World Program and murdering the student council. Overwhelmed by guilt, Hajime succumbed to a hallucination of shadows of Izuru demanding him to give up on the future. However, Hajime recovered his will to fight after he was encouraged by Chiaki's AI, and he blasted Izuru's words away with truth bullets labeled 'Future.' Ultimately, Hajime reawakened to his talent as the Ultimate Hope and helped Usami defeat Junko's AI for good.

After going back to Jabberwock Island in the real world, Hajime looked the same except for his single red eye, a sign that he had merged with Izuru. It's implied that Izuru had chosen to live as Hajime--thereby restoring part of Hajime's personality and memories--so he could bring hope to the world.

Although he decided to live as Hajime, Izuru/Hajime still retained all of his Ultimate talents. People would sometimes mistake him for Izuru, but he didn't mind. Using his Ultimate talents, Izuru/Hajime cured the comatose students from the brainwashing of the Ultimate Despair and revived them from the Neo World Program. He also set off to the Future Foundation offshore faculty to stop Ryota Mitarai from using his hope brainwashing video.

At the end of Danganronpa 3, Izuru/Hajime atones his sins as the former Ultimate Despair before he returns to Jabberwock Island and lives in peace among his classmates.

During the final Class Trial, The Mastermind Tsumugi Shirogane cosplays as the characters of the previous two games, cosplaying sometimes as Izuru. 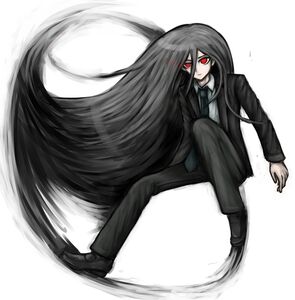 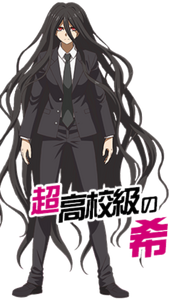 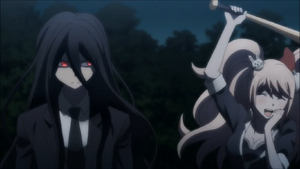 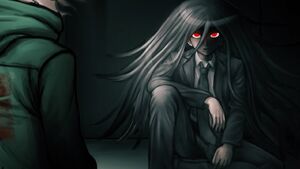 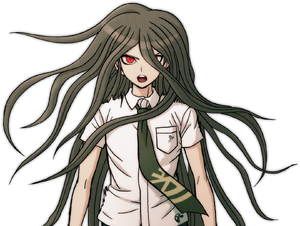