Kill anything it encounters and spread its species over the world.

Misanthropic Predators
The J'ba Fofi is a cryptid rumoured to live in central Africa. It comes from the Congo and has long been documented by the Baka natives.

The J'ba Fofi are described as giant venomous spiders which can grow up to the size of a house, and are known for weaving webs round two giant trees. The J'ba Fofi are said to prey on large animals, such as deer, birds, and would not be above eating humans. In one occasion, a J'ba Fofi was said to have dragged off a dog from a village.

The J'ba Fofi are said to be golden when young but turn brown when older.

The J'ba Fofi started as an African tale, but then expanded round the world.

The J'ba Fofi are in decline according to the Baka because of the lack of prey and human deforestation. 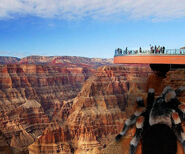 The J'ba Fofi rumoured to live on the Grand Canyon. 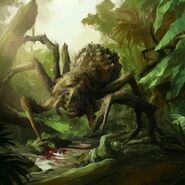