J.D. Murdoch is the secondary antagonist of the 2008 film Anaconda 3: Offspring, and one of the two main antagonists (alongside the Romanian Anaconda) of its 2009 sequel Anacondas: Trail of Blood. He is the father of Sarah Murdoch.

He was portrayed by John Rhys-Davies, who is best known for portraying Gimli in The Lord of the Rings trilogy, and Sallah in the Indiana Jones films.

J.D. Murdoch is a billionaire industrialist who suffers from bone cancer. He decides to fund a scientific lab led by Dr. Amanda Hayes that makes research about the blood orchids and experiments on a couple of anacondas in order to produce a serum for cell regeneration, which Murdoch wants because it can cure his cancer. However the two anacondas manage to break out the lab, so Murdoch sends some mercenaries to recapture them. Finally, the two snakes and their babies are killed in an old factory, but one of Murdoch's men finds one baby still alive and decides to deliver it to Murdoch.

The last surviving babies of the couple of anacondas is used by a scientist to make experiments with the blood orchids and manages to create an effective serum, however the anaconda escapes and kills the scientist. Knowing that it works, Murdoch sends mercenaries to find the serum and tells them to murder Amanda Hayes if she poses problems, but most of them are killed by the anaconda. Murdoch finally comes himself and encounters Amanda who has the serum, so he threatens to shoot her unless she gives it to him. She gives him, therefore Murdoch keeps his words and spares her, then he injects himself with the serum and discovers that it works. However, the anaconda arrives soon after and devours him. 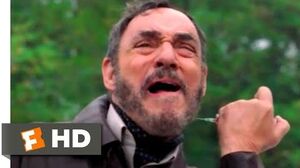 Anacondas Trail of Blood (2009) - Snake Serum Scene (9 10) Movieclips
Add a photo to this gallery
Retrieved from "https://villains.fandom.com/wiki/J.D._Murdoch?oldid=4159718"
Community content is available under CC-BY-SA unless otherwise noted.