To sell a nuclear trigger to unknown forces.

To blame John Diggle for a nuclear deal. (both failed)

J.G. Walker is a villain in the fifth season of Arrow and acts as the main antagonist in John Diggle's storyline.

He is a corrupt U.S. military general who, after selling a nuclear trigger to unidentified sources, blamed John Diggle for the deal and got him arrested. With Diggle in custody at a military prison, Walker intends to eliminate him the moment he gets the chance.

His crimes were ultimately exposed, as Walker and his accomplices are currently under guard in a military prison, until they can be court-martialed for their crimes.

He was portrayed by Garry Chalk.

In a military briefing, General Walker informs a team that a military trigger, remaining from one of the nukes that fell at Genesis Day, is about to be obtained by Chechen rebels. Calling it a standard retreival and extraction mission, Walker gives Diggle command of the mission.

During the mission, Diggle and his men are able to defeat the terrorists. After Diggle has tended to the wounds of one of his men, the two separate and try to sweep the corridors. While doing so, Diggle hears the voice of Walker and, believing him to be an ally, reveals himself to Walker. However, Walker's men disarm Diggle and Walker reveals that he has not come to secure, but to sell the trigger. Diggle calls it theft but Walker replies that you can't steal what nobody owns. He also warns Diggle to remain quiet, claiming that Diggle might just live through the situation should he remain calm.

While Walker and his men are waiting for their contacts, Walker sends two of his men to check the roof. When the two are gone, Diggle angrily accuses Walker of having murdered his own soldiers by having them walk into an ambush. Walker replies that he will carry that burden with him to the day he dies, but that he will be a wealthy man until that day comes. When Diggle reminds Walker of the oath he has sworn to his country, Walker angrily replies that, while he was able to take on enemies like Al-Quaida and the Taliban, he sees no chance of defeating meta-humans and users of magic.

Walker's men soon return, having captured Diggle's remaining teammate. Walker shoots the man with Diggle's gun. He tells Diggle that he realises that his contacts will never show up, as Diggle must have killed them before. He claims that Diggle's presence will nonetheless prove to be useful and knocks out Diggle. Diggle regains consciousness on the military base, where Walker is standing next to him. Walker hands the cuffed Diggle a paper, revealing that it is supposed to be Diggle's confession. Diggle spits on the confession and Walker urges him to reconsider, claiming that he shot the private with Diggle's gun and that he will turn the story so that Diggle turns out to be the one who tried to illegally obtain and sell the trigger. Walker also claims that his corrupt soldiers will also testify against Walker.

Diggle is imprisoned in a military prison. Although nearly everyone urges him to, Diggle refuses to fight, claiming that he deserves to be put away for murdering his brother Andy. Oliver later breaks him out and Diggle goes into hiding. However, Walker manages to lure him out, faking a call from Diggle's wife Lyla claiming that their son is sick. Once Diggle rushes home, he is awaited by Walker's men and captured again.

After Diggle is recaptured, he decides to take on Walker the legal way. Convinced by Oliver, District Attourney Adrian Chase is sent to represent Diggle. While Adrian visits Diggle in prison, they are interrupted by government agents and Walker himself, who intend to move Diggle to a different facility. However, Diggle believes that they will kill him the moment they have the chance and tells this to Adrian as Walker and his men lead him away. Before they can lead Diggle away, Chase tries to stall the procecure by claiming that they can't take him without the paperwork but Walker provides the neccessary papers. When Walker quips that it is unusual for a D.A. to get involved in military matters, Chase replies that it is unusual for a General to oversee a prison transfer. Walker claims that he makes exceptions for traitors and terrorists.

Adrian then takes another approach, claiming that he needs a district judge to ratify the papers, which could take days. Walker, at that time fed up with Adrian's tactics, claims that he had the attourney general, who owes him a favor, on speed dial and that he will have Chase discharged if Diggle is not in his custody in 24 hours. Leaving Chase, Walker then walks off.

To save Diggle nonetheless, Adrian sets up another meeting with Diggle. During the meeting, Adrian beckons Diggle to attack him, which Diggle does. When Walker enters the room, Adrian cites him a paragraph of the law which claims that the D.A. is allowed to personally oversee a prisoner's transfer if the suspect commits a secondary crime within his jurisdiction. Claiming that attacking a city official is a serious offense, Adrian then claims that he will have to oversee Diggle's transfer personally and that it might take a while. Outraged, Walker claims that he will return with a writ signed by the president personally.

In a later meeting with Diggle and Oliver, Adrian reveals to both that Walker was investigated by the NSA after the nuclear trigger went missing. However, he managed to stop the investigation as he has friends in high places. Adrian reminds Oliver and Diggle that the file exists nonetheless and might be enough to prove Diggle's innocence. However, when they later investigate they find the file to be gone. Nonetheless, Felicity is provided the file by the hacktivist group Helix. With the file, Adrian is able to get Diggle out of prison.

At Fort Surillo, Walker is to be taken into custody by the military police but he and his men fight their way through, killing over thirty military police members. Walker successfully escapes with another nuclear trigger. Investigating, Felicity finds out that Walker intends to sell the trigger to Markovian terrorists and that the deal is supposed to take place in Russia. Team Arrow follows Walker to Russia to prevent that deal from happening.

At Russia, the team searches for Walker but once they enter Walkers hideout in a church, they activate a proximity alarm and are attacked by Walker's men. Although Walker is present during the firefight as well, he escapes before all his men are defeated. As they have lost Walker's trace, Oliver and his team torture one of Walker's men for information instead. After doing a minor job for the criminal organization Bratva, their leader Anatoli provides Oliver with the location of Walker's deal and with men to take him down.

Meanwhile, Walker is meeting with the Markovian terrorists in an abandoned hangar. While talking to the Markovians, Team Arrow and the Bratva disrupt the deel, causing Walker to attempt to flee. However, while sneaking through the hangar he is attacked and thrown down by Diggle. Diggle removes his mask, telling Walker that everyone will know that Walker intended to sell a nuclear bomb to the Markovians. However, Walker merely laughs and claims that this would only be the case if Walker had indeed tried to sell a nuclear bomb to the Markovians. Walker reveals that the bomb is still inside the hangar, as he stole it back from the Markovians and intended to sell it again. Meanwhile, the team finds out that the bomb has been activated when they stormed the hangar and is now about to explode.

Still at the mercy of Diggle, Walker tries to goad Diggle into shooting him. Walker claims that he has a lot of friends with "itchy trigger-fingers" and that John has a wife and a kid. Nonetheless, Diggle refuses to shoot him and claims that Walker will stand trial so that Diggle can see justice done. After his defeat, Walker is brought away by the military and put into custody. 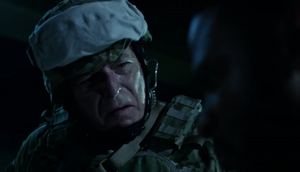 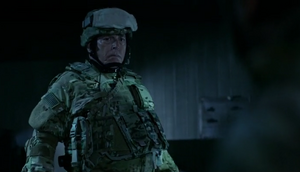 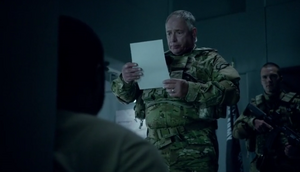 Walker hands Diggle the confession he is supposed to sign