Head of the Medical Pavilion
Member of the Rapture Council (implied)

Operating on his patients.

Make his patients as "beautiful" as possible.

Doctor J.S. Steinman is a major antagonist in the 2007 video game BioShock, serving as the main antagonist of the "Medical Pavilion" level. He is one of Rapture's residents and a notable plastic surgeon who became more and more obsessed with creating physical beauty as he used more and more ADAM. By the time he is encountered in BioShock, he has become a raving lunatic experimenting on Splicers, only to be frustrated again and again by his perceived failures. Steinman is presumably insane from ADAM addiction and with views of surgery was a gift from the Greek goddess "Aphrodite".

He was voiced by Peter Francis James.

Before coming to Rapture, Steinman was a respected medical professional at the Benjamin Church Medical College. Steinman had a successful career as an orthopedic surgeon but earned his highest accolades in the field of plastic surgery, inventing techniques that revolutionized the field. He was sorely missed by his friends and colleagues after disappearing to go to Rapture. His close friend Dr. Richard Clerkwell even hired a private detective to attempt to track him down.

Because of his great renown in the field of cosmetic surgery Steinman was one of those who were invited to Rapture by Andrew Ryan. There he set up a medical practice in the Medical Pavilion level of Rapture and advertised the offer of beauty to those residents who could afford it. When ADAM became available Steinman saw it as an opportunity for revolutionary advances in his field, making it possible to truly sculpt the flesh with ease. Unfortunately, the bad side effects of too much ADAM use began to set in, and Steinman, who had probably sampled some of his own techniques, began to experience the mental side effects. A perfectionist, Steinman was in love with his work, so much so that he became obsessed with human anatomy. Wanting to become a "Picasso of surgery", Steinman began to mutilate his unfortunate patients' bodies in horrific ways, usually resulting in death. Many splicers refer to him throughout the game, usually saying that Steinman will fix their deformities.

When Jack first enters the Surgical wing in the Medical Pavilion, Steinman can be overheard wondering why humans have two of most body parts. When Jack enters the lobby of his domain, Steinman rushes into the corridor (that ultimately leads to his surgery), chucking a grenade behind him. The explosion causes rubble to block the entrance. After Jack removes the debris, Steinman directs a security bot at him and retreats to his operating theater to continue his "art".

His fixation on physical perfection, combined with the effects of increased use of ADAM, turned him from a surgical perfectionist into an "artistic" monster. He is seen torturing other (still living) inhabitants of Rapture in an attempt to make them "beautiful" (however, it seems that Steinman now has a very twisted definition of that word), as well as having many dead bodies and other such disturbing evidence scattered around his area. His audio diaries are the first real exposure the player has to the total effects (mental and physical) of repeated splicing. Although Steinman was a perfectionist in surgery, it is revealed in an audio diary that he is not the chief of surgery; he instead may be the chief of plastic surgery. It does appear Ryan gave him a level of power over the Pavilion above his rank, or in the anarchy of Rapture, he assumed the power himself. Steinman is the first boss the player encounters.

One diary reveals that Dr. Steinman became so utterly obsessed with making his patients beautiful, that he actually began seeing hallucinations of Aphrodite, the Greek goddess of beauty. Dr. Steinman looked to this imaginary figure to guide him in his quest to make his patients as beautiful as she (in his mind, she encouraged him to make his patients non-symmetrical, only furthering his desire to become the "Picasso of surgery") but his constant failures only drove him further and further down the road of insanity. When Fontaine's recruits rose up, Steinman locked himself in the surgical area of the Medical Pavilion, operating on the remaining Splicers in the pavilion. Atlas informs Jack that he will need the key Steinman possesses to travel to Neptune's Bounty. 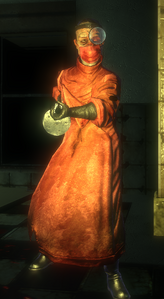 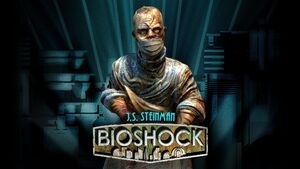 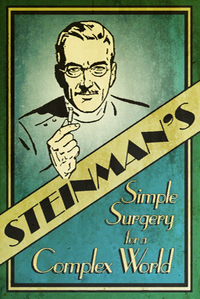 An advertisement for Steinman's surgery. 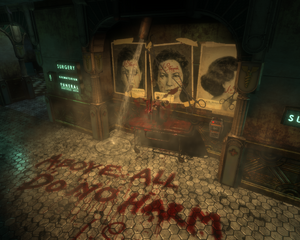 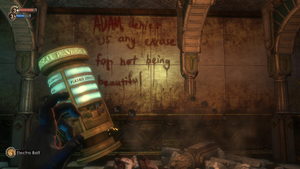 "ADAM denies us any excuse for not being beautiful". 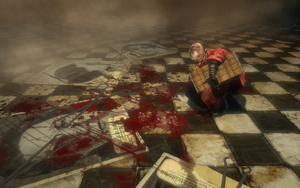 Steinman as he first appears in-game. 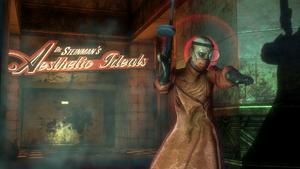 Steinman as he sends Security Bots after Jack. 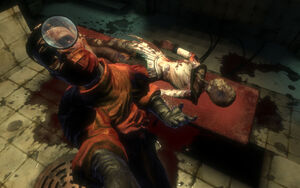 Steinman with one of his Splicer "patients". 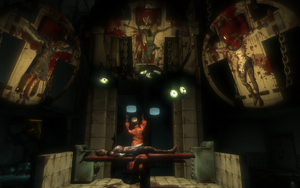 Steinman shows off some of his murdered victims. 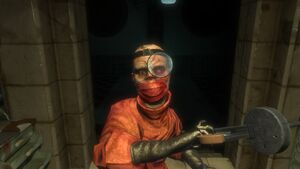 A close-up of Steinman in his surgical quarters. 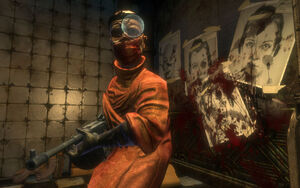 Steinman armed with a Tommy Gun. 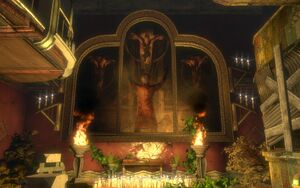 A painting of Doctor Steinman and his victims in BioShock 2.
Add a photo to this gallery

Retrieved from "https://villains.fandom.com/wiki/J.S._Steinman?oldid=3932715"
Community content is available under CC-BY-SA unless otherwise noted.