J. Geil, (also known as J. Gale or Centerfold in various localizations) is a major antagonist in JoJo's Bizarre Adventure: Stardust Crusaders. The archenemy of Jean Pierre Polnareff due to J. Geil being the rapist and murderer of his sister, J. Geil is also the son of Enya Geil and one of the mercenaries hired by DIO. J. Geil wields the Stand Hanged Man.

A serial murderer and rapist, J. Geil is responsible for the defilement and murder of several women, one of them being Sherry Polanreff, the sister of Jean Pierre Polnareff. Polnareff pursued him wanting revenge, but the only thing he knew about Geil was that he had two right hands. After Polnareff joins Jotaro Kujo in his quest to find DIO, J. Geil teams up with Hol Horse under DIO's group of assassins, wanting to kill Polnareff personally. Hol Horse challenges Polnareff, while he covers for him. The duo seemingly kills Avdol, who saved Polnareff from Hol Horse, forcing him to run away with Kakyoin, but J. Geil decides to give chase with his Stand. He attacks them in their truck, making them stop the truck and jump out. They notice that J. Geil's Stand attacks from reflective surfaces, jumping from one mirror to another. The Stand jumps to a kid's eye, attacking Polnareff from there, so he kicks sand in the kid and stabs the Stand while he jumps to his own eye. Polnareff hears the screams of J. Geil and goes there with Kakyoin, finding an injured man lying down. As they notice that the man has a left hand, Polnareff is stabbed by a knife on his back. J. Geil then shows his face and mocks the two, calling a lot of beggars who surrounds them, so his Stand can have many reflective surfaces to attack them. However, Kakyoin takes a coin and toss it to the air, making all beggars to look to it, and Polnareff kicks sand in the man where the stand was, forcing it to jump to the coin and slashing it. With J. Geil defenseless, Polnareff stabs him repeatedly with Silver Chariot and impales him on a fence post.

J. Geil's Stand, Hanged Man, is a Stand made from of light. It jumps from one reflective surface to another, and attack his victim's reflection. He cannot be attacked while he is in a mirror. Because the stand is made of light, it moves at light speed. The only way to attack the Stand is to hit the light. 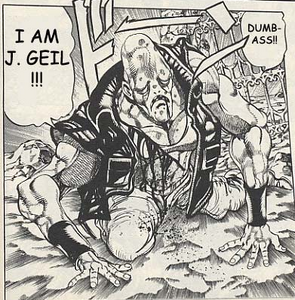 J. Geil in the manga. 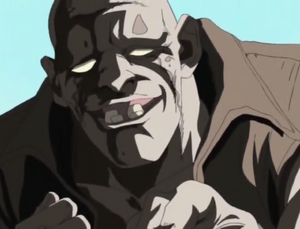 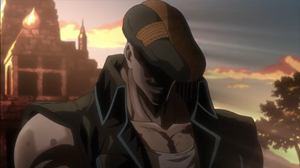 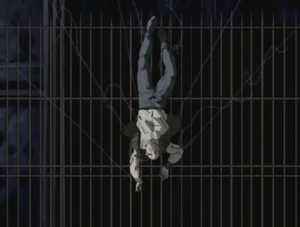 J. Geil's demise in the OVA. 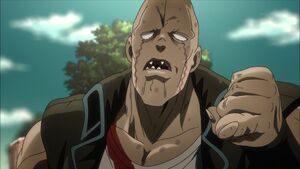 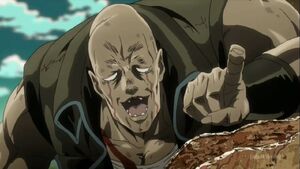 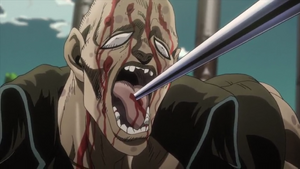 J. Geil shortly before his demise in the anime. 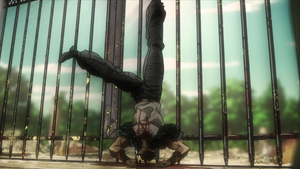 J. Geil's demise in the anime.