Player's choice of nano-augmentations, including regeneration, great durability, speed, strength, and agility, and choice of skills such as marksmanship and hacking

Whatever the player wills, whether it be helping the poor or vandalism

JC Denton is the protagonist of the cyberpunk video game Deus Ex, and a major character in its sequel, Deus Ex: Invisible War. At the beginning of the original Deus Ex, JC is a rookie special agent working for the United Nations Anti-Terrorist Coalition, augmented with nano-technology (as the game progresses, the player will have the options of choosing various "nano-augs" to install and upgrade).

Depending on the player's choices of action and dialogue, JC's personality and actions can range from morally admirable to reprehensible, or merely ambiguous. In Invisible War, the player can choose to side with JC and his faction, or oppose him.

He is voiced by Jay Anthony Franke.

In 2028, Paul Denton's mother, who is unable to have any more children but wants another, is approached by operatives of the Illuminati splinter group Majestic 12 posing as fertility experts. She is told that she will be paid handsomely in exchange for participating in experimental surgery that will allow her to become pregnant. Mrs. "Denton", had been poor her entire life, now she could have another child and have enough money to raise her family in comfort.

The "fertility experts" assure her that the surgery is minor and the risk is minimal. After the parents of Paul agree, the mother is implanted with a cloned embryo of Paul. Their lives have already been carefully monitored by MJ12 for many years, as tests in Paul's early childhood show him to be highly genetically compatible with the emergent augmentation technology with which MJ12 hopes to create an army of super-powered agents.

9 months later on March 17, 2029, JC Denton was born. In 2035, Majestic-12, displeased with Paul's progress, decided that his parents should not be allowed to raise JC. Paul and J.C.'s parents were killed and JC was sent to Majestic-12's Swiss School where he spent the next 12 years of his life. During this time Majestic-12 attempted to instill in JC unquestioning loyalty to superiors and a willingness to obey orders.

Instead, J.C. developed a hidden rebellious attitude. In 2047, J.C. Denton graduates from Swiss school. Sometime between his brother becoming UNATCO's first nano-augmented agent in 2050 and his own recruitment by UNATCO in 2051, J.C.'s adopted parents were killed.

24 years ago in 2052, JC is a new anti-terrorist agent working for the United Nations Anti-Terrorist Coalition, based on Liberty Island. His first mission is to investigate an NSF terrorist attack on the island itself, and find the leader in the Statue of Liberty. After this he is sent to follow the terrorists' trail to recover stolen Ambrosia, a cure for the Gray Death virus that is plaguing the planet. Once he has found the final stolen barrel of Ambrosia, he is given the choice of killing the terrorist leader, Juan Lebedev, allowing his partner Anna Navarre to kill Lebedev, or to kill agent Navarre.

Regardless of his decision, he returns to UNATCO headquarters and is sent on a mission to Hong Kong. Before leaving, he rebels against UNATCO and is captured and imprisoned in an MJ12 base beneath UNATCO headquarters. He escapes to Hong Kong to meet Tracer Tong, whom he is told can deactivate his killswitch.

After uncovering a conspiracy in Hong Kong and uniting the warring Triads, JC goes to a naval shipyard to investigate ties the Illuminati may have to the global conspiracy. Stanton Dowd, owner of the ship and high-ranking Illuminatus, sends JC to Paris to meet the leader of the Illuminati, Morgan Everett. Everett sends JC to Vandenburg, where he meets and helps a group of scientists called X-51 who are trying to make their own cure for the virus.

JC finally goes to Area 51, and is given three choices: kill Bob Page, leader of Majestic-12, allowing the Illuminati to come to power; merge with Helios, an artificial intelligence, and rule the world; or destroy Area 51, plunging the world into a new dark age.

JC Denton becomes central to the plot of Deus Ex: Invisible War despite making an appearance only towards the end of the game. Invisible War takes place after JC's actions at Area 51. Due to multiple endings in the original, the developers decided to make all endings canon. After JC merges with Helios with the goal of creating the world's first true benevolent dictator, he then destroys Area 51 (it is unknown at which stage JC decided to kill Bob Page). Unfortunately, defects in JC's nanite architecture resulted in an imperfect merge. JC would be forced into stasis to wait for a cure, lest he die from the merge.

JC's goal was to bring about the world's first "post-human civilization". By giving all humans the mental and physical advantages of biomodification, JC hoped to eliminate the stratification of humanity encouraged by the Illuminati. Additionally, biomodification would allow all human minds to communicate with the Helios A.I., which has the processing power to gauge the desires of each individual human. It would instantly respond to these desires, and thus bring about an "instantaneous democracy". JC intended for Helios to communicate, not to assimilate, unlike the Omar cyborg collective. However, because Helios would know each and every human thought, many of JC's enemies (such as the Illuminati and Knights Templar) feared the "Great Advance" would bring about universal slavery rather than universal democracy (the Illuminati believe that perfect slavery and perfect democracy are exactly the same thing). Also, many feared the complete loss of privacy the "Great Advance" would bring about.

The merge with Helios gave JC total control over nanotechnology, transforming him into a walking Universal Constructor. He receives the power to control the weather, to alter matter on an atomic level, and to shape objects and buildings from the material he walks on.

In the finale of Invisible War, JC behaves the same as every other human in combat, should the player choose to oppose him. He is tougher than any other character in the game, making him harder to kill. If Alex decides to follow JC, the closing cinematic of the game shows all of humanity uplinking with Helios, who instructs them to break down the boundaries between themselves. If Alex kills JC, and sides with either the Templar or the Omar, the Helios A.I. right before destruction revives JC. In one final attempt to prevent what JC and Helios perceive as the end of the world, JC will engage Alex and say "You want to plunge the world into chaos? Come and take it from me".

J.C. Denton is a code name. He is revealed to be sharp, intelligent and perceptive, yet cold, stolid and a bit of a loner. This is in contrast to his brother, who is passionate and emphatic. In an early conversation with his brother, he states that he is "used to being on his own" after Paul fondly remembers his UNATCO initiation ceremony.

Paul then wryly remarks that "one can be TOO self-sufficient...". However, JC is also highly idealistic and believes his work in UNATCO to be heroic and for the greater good (although this can ring hollow if the player chooses to act immorally and destructively.

JC's personality is, however, largely down to the player, as the game gives the ability to carry out whatever action he or she desires, whether it be morally admirable or reprehensible - such as murdering every NPC in sight, including animals and even children, using a variety of methods and weapons, straying into women's bathrooms (an instance of this in your first visit to UNATCO HQ earns you a rebuke from your boss), breaking and entering people's homes and offices, stealing money from bank accounts, choosing dialogue options that are unnecessarily antagonistic, bullying, and rude, and provoking NPCs into attacking you or running away. One of the childhood heroes of J.C. Denton is Sam Carter, whom JC read about in school. 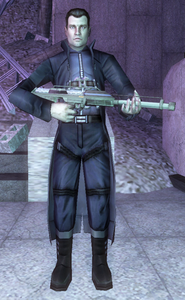 Retrieved from "https://villains.fandom.com/wiki/JC_Denton?oldid=4345746"
Community content is available under CC-BY-SA unless otherwise noted.