Steal all the riches he can find.

Take over Jack's body forever.
Kill the lizard monks and destroy their home (all failed).

Jack-Aku is a minor antagonist in the 2001 animated TV series Samurai Jack. He is Samurai Jack under the influence of Aku via an infection.

As a mix of Jack and Aku, he was both voiced by Phil LaMarr and the late Mako Iwamatsu respectively.

Jack-Aku was walking on a snowy mountain in "Episode XLII: The Aku Infection", looking to find a portal. While the Jack half wishes to use it, the Aku half wishes to destroy it.

The part of him that is Jack is a bit scared and wants to find help, but the part that is Aku is greedy and wants to destroy everything. Due to being a mix of Jack and Aku, he constantly switches between being kind and mean. 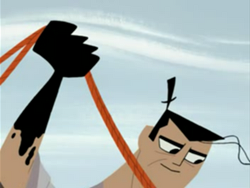