Being upgraded by Jack Spicer.

He customized them in different shapes, weapons and forms to better suit his needs or wants.

The Jack-Bots were various robots created by Jack Spicer and had been upgraded many times and had many various forms. Each kind of Jack-Bot had it's own abilities and weaknesses. Jack was inspired by many animals and characters of the series to make Jack-Bots similar to them (like Wuya-Bots).

Customary Jack-Bot created and used most frequently. It had hands with long and sharp, metallic claws that could cut even rock and stone.

Similar to the normal Jack-Bot though it did not have hands, it had blades. The blades could cut rock and stone and in some cases, even metal.

Same as the regular Jack-Bot but instead of having hands, it had a gun that could be shot out of it's chest. The gun could shoot powerful lasers that could destroy almost every material. They could also charge their attacks.

Same as the Jack-Bot but it did not attack. These were made solely for scaring Katnappe's cats. It resembled a dog.

The Jack-Bot that was used by Jack which was very gigantic, it could shoot lasers and blasts, and could even be used as a train. It was one of Jack's most powerful Jack-Bots. Due to it's size it's laser beams were bigger and more powerful than the laser beams of the Gun Bots.

A non-combatant bot with a soda dispenser and paper cup dispenser in it's chest; the selections include Ginger Ale.

The Yes-Bot was a bot made for Jack Spicer. It was meant to always acknowledge Jack and to agree with his ideas. It was designed more like a butler rather than the other Jack-Bots.

Smaller bots made to look like Wuya in her ghostly form and spray an oil-like substance out of her ghostly hair or tentacles.

They were Jack-Bots with the ability to fly at very high speeds. They were made by a very tough metal and they usually crushed on the monks to put them on defense.

By far, the most dangerous Jack-Bots that Jack has ever been capable of mass producing. These Jack-Bots are three times larger than Jack's normal Jack-Bots, with deeper voices and interchangeable limbs. The most distinct feature about these Bots are the processors built into every limb. This allows for the discarded limbs of Jack-Bots whose bodies were destroyed to form an equally, if not more powerful Bot by combining the limbs together, or by adding extra severed limbs onto a surviving body for extra firepower and dexterity. The Guard-Bot variations come with legs.

Jack's most powerful Jack-Bot. A humanoid robot, that could transform into anyone at will and pretend that it is someone else. It was also incredibly strong and durable too.

Robots with the appearance and the personality of teenage cheerleaders. They used to shout "Go, Evil, Go!". They had superhuman strength and durability.

A robot with the same appearance and personality of Jack Spicer. It had also enhanced strength and durability. It could also fix itself, if a part of his body was broken.

A robot that was designed to be Jack Spicer's personal chef. 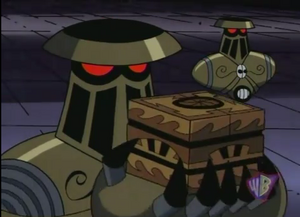 A Jack-Bot with a box 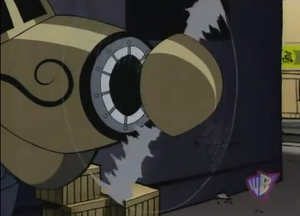 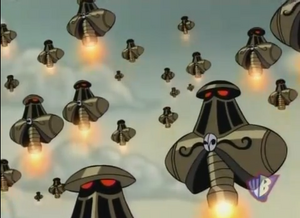 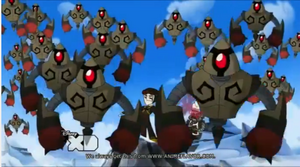 Jack-Bots in Xiaolin Chronicles
Add a photo to this gallery

Retrieved from "https://villains.fandom.com/wiki/Jack-Bots?oldid=3465612"
Community content is available under CC-BY-SA unless otherwise noted.