Villains Wiki
Register
Don't have an account?
Sign In
Advertisement
in: Thought-Forms, Anthropomorphic, Five Nights at Freddy's Villains,
and 15 more

Jack-O-Bonnie is essentially just a reskin of Nightmare Bonnie. The changes made in it involve Jack-O-Bonnie being orange, rather than blue, and having an orange candelight glow out of its body.

In Five Nights at Freddy's 4, he acts exactly the same as Nightmare Bonnie, with only a cosmetic change to him.

His role parallels that of Jack-O-Chica, coming in from the west hall of the house. Unlike Chica, however, upon entering the room to attack, he himself attacks the child. He is also the more frequent attacker out of the two.

The child has to hold the left door shut to prevent him from getting in. If the child flashes the light at him when he is standing right outside the door, he will attack him, and if he turns his back on the door to look at the bed, he will enter the room and attack.

The only way to tell he is at the door is to listen for his breathing. Holding the door will cause him to walk away, being unable to enter.

In Five Nights at Freddy's VR: Help Wanted, he appears in two minigames from the DLC "Curse of Dreadbear". In "Danger! Keep Out!", he will approach the office from the left side and try to bash down the wooden doors, and he must be deterred using the flash to prevent his attack. In "Pirate Ride", he will appear in the secret backstage area of the ride and will come after the player. He can be stopped if the red doors bottons get shot.

Jack-O-Bonnie comes back in this game as one of the animatronics of the Fazbear Funtime Service. He will act very similarly to Jack-O-Chica, but, differently from her, he will be completely silent, and he will not emit the sound of footsteps when moving. 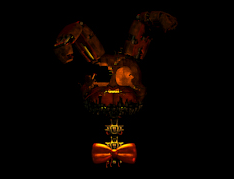 Jack-o-Bonnie's Jumpscare at the left hall.

Jack-o-Bonnie’s Jumpscare in the bedroom. 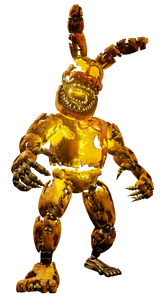