She is voiced by Keyondra Shanae.

Jack-O-Chica is essentially just a reskin of Nightmare Chica. The changes made in it involve Jack-O-Chica being orange, rather than yellow, having an orange candlelight glow out of its body, as well as having the Nightmare Cupcake replaced with the less-menacing Pumpkin.

She acts exactly the same as Nightmare Chica, with only a cosmetic change to her.

Jack-O-Chica's role parallels that of Jack-O-Bonnie, coming from the East Hall of the house. Unlike Bonnie, however, when the child's back is turned, she sends another animatronic known as the Pumpkin to do her dirty work. She is the slower out of her and Bonnie, and tends to wander into the kitchen, banging around dishes for unknown reasons. The child has to hold the right door shut to prevent her from getting in. If the child flashes the light at her when she is standing right outside the door, she will attack him, and if he turns his back on the door to look at the bed, Chica will have the Pumpkin enter the room and attack. The only way to tell she is at the door is to listen for her breathing. Holding the door will cause her to walk away, being unable to enter.

Jack-O-Chica returns as a selectable antagonist in the game, Five Nights at Freddy's: Ultimate Custom Night. She only appears if the temperature of the office becomes too high. She will be visible on the camera on both the left and right side. The player must then close both doors simultaneously and wait until they hear a thud noise to open the doors again. Considering this mechanic uses a lot of the player's power and is generally difficult to keep track of, strategically, it would be best to keep the office's temperature low to prevent her from appearing.

Jack-O-Chica appears in two minigames from "Curse of Dreadbear", the Halloween DLC of Five Nights at Freddy's: Help Wanted. In "Danger! Keep Out!", she will approach the office from the right entrance, and must be deterred with the flash before she will be able to finish bashing down the wooden doors. In "Pirate Ride", she will come after the player if he will access the secret backstage areas, and the player must shoot the red door buttons to avoid her from reaching them.

Jack-O-Chica comes back in this game as part of the Fazbear Funtime Service as an event-exclusive animatronic for Halloween. She will behave very similarly to the other animatronics, but she has a special mechanic where she covers the screen in ash, blocking the player's view. The player must shake their phone when this happens to clear it. 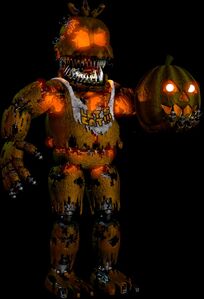 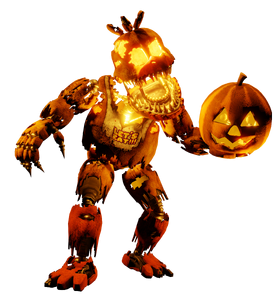 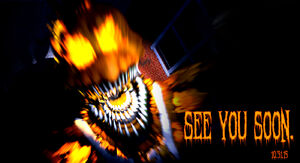