Jack Schmidt, also known as Jack the Clown, is the main antagonist and the first icon created by Universal Orlando Resort for their seasonal event known as Halloween Horror Nights.

He first appeared in 2000 as the icon of Halloween Horror Nights X. He is an insane former circus clown and serial killer who murders his victims according to his twisted sense of humor. He was introduced as the first original icon for the event during it's tenth year, and became so popular that he has been used several more times over the years.

Clowns Are Always Laughing on the Outside...

Jack Schmidt is a carnival performer who loves to entertain children with his practical pranks and prat-falls during his stint with Dr. Oddfellow’s Carnival of Thrills. He had escaped a poor and highly abusive family years earlier to "run away and join the circus", leaving behind his younger brother, Eddie.

But underneath the greasepaint and clown nose, he was a twisted murderer. He was wanted for the abduction and disappearance of several small children throughout the Southern states. Police officials and the F.B.I. soon caught on that the missing children followed a pattern that led them closer and closer to the traveling freak show.

On Halloween 1920, the police were closing in on the Clown killer. Fearing capture, Jack revealed his sinister secret to Dr. Oddfellow in the hopes of possible concealment. The doctor, himself wanted by the police for the accidental death of several patrons in a freak circus accident years earlier under a different name, was not sympathetic to Jack’s cause. He quickly admonished him for potentially bringing the police down upon the entire band of miscreants. He asked Jack to show him what he had done with the bodies of the children. Jack revealed the bodies of thirteen children hidden in the confines of three small trunks that were kept in his traveling coach.

Fearing the worst, Dr. Oddfellow had Jack murdered and his body hidden within the traveling carnival's House of Horrors as an exhibit, along with the bodies of the children. Years later, the Carnival was sold by Dr. Oddfellow, and the various dark rides and exhibits were split and sent to various owners around the states, including the House of Horrors and its grisly secret.

Not Afraid of the Dark?

Sixty years later, in the Fall of 1980, a television crew from the BBC was documenting the great Dark Rides of America. They journeyed throughout the eastern seaboard looking for forgotten carnival rides and attractions and stumbled upon the House of Horrors as it sat abandoned in a Louisiana junkyard. The crew asked permission to film the interior, and pried open the doors of the forgotten relic to step inside. The smell of decay was overpowering as the bright camera light illuminated the darkened corridors. Moving past the faded walls and hanging fabric, the smell began to increase. The cameraman retched as he panned his camera towards a series of trunks. Behind the trunks was a large wooden box stenciled like a children's toy. One letter filled each side of the box, J-A-C-K. The cameraman steadied his camera as the host of the show investigated the box. He found a large crank on the side of the box and turned it. It started to move with some resistance, but after a few twists, it freely moved in a clockwise rotation. A clanky musical melody played out as the host turned it. Suddenly, however, the Music stopped and wouldn't start again with his continued rotations. The camera light suddenly died, and then the crank rotated a few spins on its own. The top of the box flew open and a form sprung out. Affixed to a giant spring was the decomposing body of Jack Schmidt. After a thorough police investigation, the bodies of the thirteen children as well as the body of Jack were shipped to the local Louisiana coroner's office for further examination. Around midnight on Halloween, the van carrying the body and box of Jack disappeared into the Louisiana swamp in a freak accident. Later that week, the bodies of the BBC cameraman and host were found as the victims of a grisly and unsolved murder. Throughout the following years, urban legend retellings of the tale started, with a corresponding story about the decomposing body of Jack killing again. The legend states that Jack is searching for Dr. Oddfellow, in a thirst for vengeance. The legend also states that Jack will reward anyone who releases him from his toy tomb by turning the crank with a very special reward.

In 2000, Universal Studios bought the old props from the old House of Horrors, including what was sold as the box that Jack was trapped in for so many years. Apparently, some poor fool tried to test this claim, and Jack was unleashed on the unsuspecting Halloween Horror Nights guests for the first (but certainly not the last) time. Jack's presence lingered in some form or fashion throughout the years, until he was resurrected (but has been turned back into a mortal) along with other Icons for HHN's Sweet 16 celebration during 2006.

The now mortal Jack was soon caught by the authorities and committed to the Shady Brook Asylum For The Criminally Insane, an institution that had suffered an inmate escape a few years earlier. Though often isolated in the Maximum Security Ward, Jack's mere presence seemed to have an adverse affect on the unstable population, who started emulating the crazed clown, much to the staff's dismay. Eventually, the inmates started a mass riot, gruesomely tortured the hospital staff, and put Jack in charge of the facility. During the chaos, Jack found records that his former boss and murderer, Dr Oddfellow, was still alive (but presumably now a very old man since he had been on the job since the 1920s) and running a small traveling carnival.

Jack left Shady Brook, traveling to the depravity of Dr. Oddfellow's Dark Carnival and Emporium. In the dark of night, Jack stalked into the tents and took his long-overdue vengeance. When he emerged, he was changed. During incarceration, Jack got a taste of what it was like to run the show, and he desired to be the ringmaster of his own carnival. He dressed himself in the bright red coat and boots of a proper Ringmaster. He also adorned himself with a crude top hat and terrible trinkets of his liking. He completed the transformation with Dr. Oddfellow's prized possession (which also presumably what kept Oddfellow alive and in motion for 80 years): a silver-headed cane of souls. Putting the Carnival on hiatus, Jack spent the next few months traveling the world to find the right sideshow acts for his deadly Carnival of Carnage. He gathered a plethora of monsters, mutants, madmen and maniacs, many with egos nearly as large as his own, luring them with promises of fame, fortune, show business, and plenty of fresh victims. After nearly a year of preparation, Ringmaster Jack opened his dark Carnival of Carnage in Orlando, Florida.

The Carnival of Carnage

Thanks to a deal with New Line Cinema , Universal Studios was able to use classic slashers for Halloween Horror Nights: Carnival of Carnage. Heavily carnival themed, it deserves special mention here. Jack's pride and joy, the Clown Prince of Pain has spared no expense to bring his murderous vision to life. As the primary attractions, Jack enlisted three of the most famous slashers in movie history, as well as a collection of freaks, mutants and loonies who share his twisted dream.

Attractions include main ringers, a collection of maniacal madmen never before seen before a live (and still living) audience.

During the twentieth anniversary of Halloween Horror Nights in 2010, Jack and the other four previous icons have all became the minions of Fear. Jack was represented as Chaos.

Jack is an evil clown, and was inspired by examples of coulrophobia from both real life and fiction, most notably of urban legends of Phantom Clowns who in the early 80's were supposed clowns or men dressed partially like clowns in vans attempting to lure and abduct children. Child killer/party clown John Wayne Gacy also seems to be a major inspiration, as well as the Batman villain, the Joker.

Jack's appearance is a twisted variation on the traditional garish clown getup. His wild tuffy hair resembles fire, and green makeup on his white face above his eyebrows suggests an unfriendly attitude. Evil, orange eyes glare out of dark sockets, and he grins with a green-rimmed mouth of yellowed, protruding teeth under a big red nose. His fingernails are long and dirty, and his polka-dotted costume is stained with blood. In PsychoScareapy: Maximum Madness at Halloween Horror Nights: Sweet 16, he was in a strait jacket, with most of his make-up washed off, a beard, and several cuts on his face. At Halloween Horror Nights: Carnival of Carnage in 2007, his signature polka dot costume was replaced with a red leather jacket, although his pants still have the polka dots with multiple colors. He has also been given torn, fingerless gloves.

Aside from the fact that he is an insane psycho killer clown, Jack is also a vain glory hound with a huge ego. He considers himself a star performer, and is as quick to throw out a few puns to get laughs as he does screams. He loves to be the center of attention and is jealous of the spotlight: it drives him to homicide when he thinks someone is trying to upstage him. He does show some restraint, such as during a performance (or at least until he can improvise the death of the upstart into the act later). He has also been known to hold off killing someone if it means gaining attention, such as when he guest- starred on a radio talk show to promote his Carnival of Carnage. He does show admiration for the work of others however, such as his younger brother Eddie (his first audience), to whom he sent funds to help restart his murder-for-profit business, "RUN" and other killers who have a flair for the theatrical. He seems to have little-to-no respect for "Bio-Exorcist" Beetlegeuse. 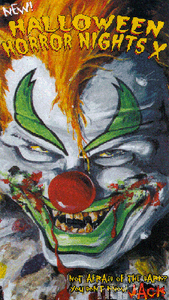 Jack on a ticket to Halloween Horror Nights X in 2000. 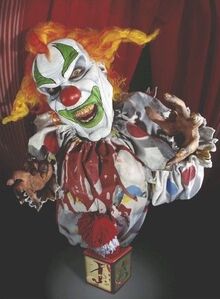 Jack Schmidt jumpng out of his jack-in-the-box. 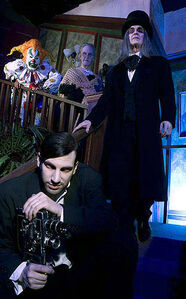 Jack with the Caretaker, the Director, and the Storyteller. 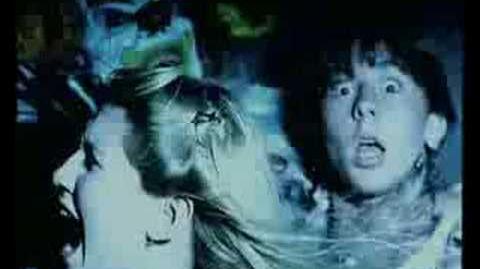