Captain Jack
Jack the Stooge (by King and Queen)

Torturing his victims by cutting off their body parts.
Ruling the region of Kuri in Wano Country.

Rescue Doflamingo from the Marines.
Kill Zunisha which would cause Zou to sink into the ocean (all failed).
Wait for someone to pull him out of the ocean (succeeded).

Jack is an All-Star of the Beasts Pirates and one of Kaido's right-hand men known as the Three Calamities along with King and Queen. He is the main antagonist of the Zou Arc and a major antagonist in the Wano Country Arc in the manga and anime, One Piece. His epithet is Jack the Drought. His bounty is worth 1,000,000,000 berries. But he is considered to be the weakest by King and Queen. Jack is also a Giant Grouper Fishman.

He was voiced by Kenji Nomura.

Despite his fearless attitude, Jack was shown capable of experiencing great fear as he remained frozen in place while his crew was running for their lives when Zunisha swung its trunk at him. He was also fearful of his captain Kaido, when the latter spoke to him in dragon form. Jack even displayed a submissive attitude to his fellow Disasters when they verbally berated him.

Despite of his ruthless attitude, Jack shown respects to his fellow disasters, King and Queen as he addressed them as "Big Brothers" despite they've scolded him about his failure of rescuing Doflamingo and the situation on Kuri.

As All-Star who are Kaido's three right hand men, Jack has the authority over low ranking subordinates. His 1 billion bounty is prove to be a dangerous threat to the World Government's operations.

Jack has tremendous strength and endurance. However, his strength alone is no match for Marines while having Vice-Admirals Tsuru, Maynard and Bastille, Admiral Fujitora and former Fleet Admiral Sengoku while carrying Doflamingo to Impel down He has durability when he took attacks from Inurashi and Nekomamushi from their fight at Zou and got slashed by Ashura Doji. However, His fellow All-Stars considered Jack to be the weakest.

Jack ate Zou Zou no Mi: Model: Mammoth an ancient Zoan class devil fruit. It allows Jack to become a hybrid or full mammoth. Jack can level buildings with a single swing of his trunk. However, Jack's attacks will be heavy and slow and unable to hit any enemies with high speed.

A couple of days later, Jack appeared on Zou looking for Raizo. He was confronted by the Minks who resided on Zou. The Minks calmly told Jack and his crew that they did not know the whereabouts of Raizo and that they can talk about the situation. Jack refused to talk to the residents and vehemently demanded Raizo.

Since Jack did not want to partake in any negotiations, the Minks decided to fight Jack and his crew in a battle that lasted for about five days. The Minks held an advantage over Jack's crew until Jack decided to release Caesar's poison gas to cripple his targets. He began to torture the Minks to ask for the whereabouts of Raizo. When he heard about Doflamingo's defeat by the hands of Luffy, he decided to leave the island immediately to rescue Doflamingo. He left behind some of his crew members to keep an eye on the Minks of the island. Unbeknownst to Jack, Sheepshead was defeated by the Straw Hat pirates and the remaining crew retreated.

After some time passed, Jack and his crew mates were rescued from underwater and they all returned to the Wano Country. According to Kiku, Jack was spotted a few days ago in the Kuri region where he rules over. After hearing the news of Luffy's appearance in his territory, Jack arrived in Okoboro Town. He encountered Shutenmaru and fought with him. Because of Shutenmaru's strength, Jack told him that Kaido wanted him to join his crew but the latter refused. Kaido appeared in the sky above Okobore Town and commanded Jack to find the Straw Hat Pirates for him. Jack stand by as Kaido caused chaos in Okobore Town. Jack realized that Kaido was drunk. Basil Hawkins appeared and told Kaido that Law and Luffy were at Oden's castle ruin. Jack wanted to know if that was true but Hawkins told him he did not know and wanted Kaido to leave Okobore Town since he was causing trouble.

After incident in Okobore Town, Jack went to Onigashima Island. King and Queen, the other disasters, talk with Jack about whether he found new brokers the Beast Pirates can ally with since Doflamingo got defeated and arrested. King and Queen insulted one another and both of them insulted Jack.

Jack appears in Onigashima alongside King and Queen contemplating the issue of Big Mom being in Wano. The three stand and watch a chained up Big Mom eat food prepared by the Beasts Pirates. As Queen blames King for not doing a good job keeping Big Mom out of the country, Jack wonders why Queen brings Big Mom to Onigashima. Queen tells Jack that the communication network was cut off in Udon and that he had no other choice but to bring her to Onigashima. Jack witness Kaido ordering the Beasts Pirates to unchain Big Mom and witness both emperors clash. 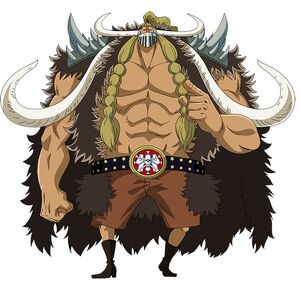 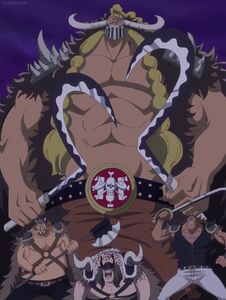 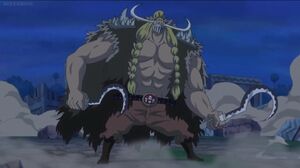 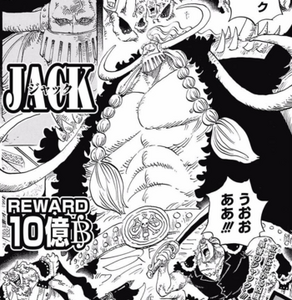 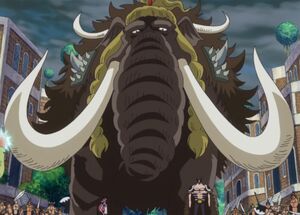 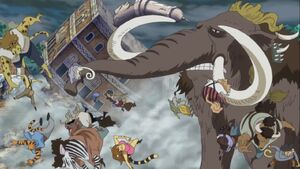 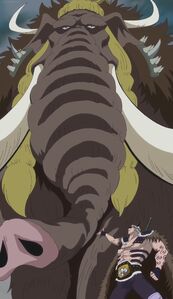 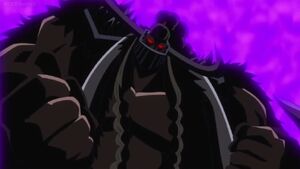 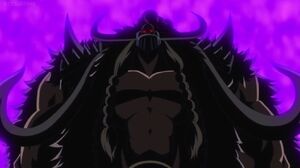 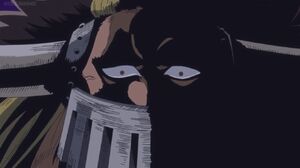 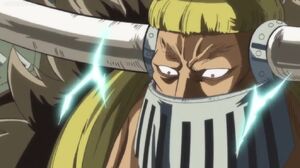 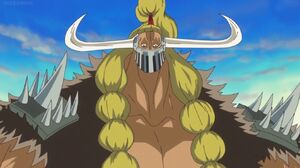 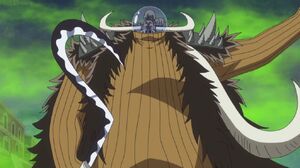 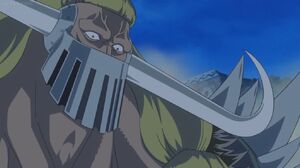 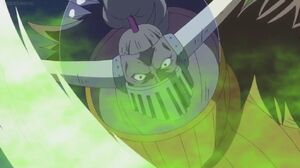 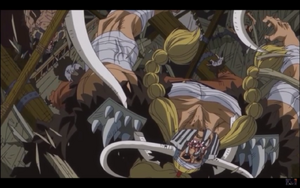 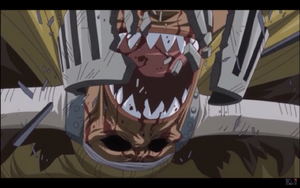 Retrieved from "https://villains.fandom.com/wiki/Jack_(One_Piece)?oldid=3497404"
Community content is available under CC-BY-SA unless otherwise noted.