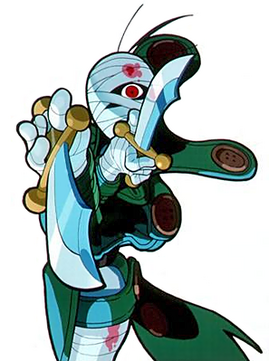 He weighs 112 pounds, measures 6'3", and has an original fighting style. He and Ryoma are the only two characters in the original Power Stone who wield a weapon. Jack is from the town of Manches (reference to Manchester).

He is likely a reference to Jack the Ripper (a poster in his ending calls him "Jack the Slayer"). When in Power Change, he is known as the Mad Clown.

In the anime, Jack (Winslow) is chasing after Falcon's Power Stone, calling it his "lovely". It was revealed in the anime that his mother had a Power Stone like Falcon's, which is the reason why he wants Falcon's Power Stone. It was also revealed that Jack may be over 100 years old and that he wears bandages because he was burned after his ship caught fire, killing his mother. Jack mistook Rouge for his mother once. At the end of the series, Jack finally gets his hands on Falcon's Power Stone but is soon accepted by the gang as their friend. Afterward, he lives with the animals in Dark Land.

Jack makes no distinction between right and wrong. He only cares about pretty, shiny things, and cutting with his knife. In Manches, his hometown, he used to stop women and steal their shiny jewelry. But then one day he overheard a tale about the Power Stones, the most dazzling jewels in all the world, and he immediately set off to claim them for his own.

Unlike all the other Power Stone characters, Jack crawls, so he can avoid many attacks. Jack's Killer Dance is hard to dodge but can be avoided, giving the opponent a chance to attack him. In Power Stone Collection, he unlocks the Manches Chainsaw. In the first game, he wanted the Power Stone so that he could wish for a duplicate of himself so that he could still prowl the streets of Manches at night, while the duplicate remains in prison.