Anacondas: The Hunt for the Blood Orchid

Dr. Jack Byron is one of the main antagonists of the film Anacondas: The Hunt For The Blood Orchid.

He is portrayed by Matthew Marsden, who also portrayed villains including Alexander Slater in Resident EVil: Extinction.

Jack was part of a team of pharmaceutical researchers along with Gordon Mitchell, Sam Rogers, Gail Stern, Cole Burris and Ben Douglas, who went to a jungle in Borneo to search for the "blood orchid", a flower with miraculous effects.

Jack bribes their guides Bill Johnson and Tran Wu to make them take an unsafe path through the river. During the research, Gail falls into the water and gets attacked by a crocodile, but Bill manages to save her and to kill the reptile. The following day, the boat falls over a waterfall and is destroyed, obliging the team members to walk through the jungle. However, a giant Anaconda attacks them and kills Ben, but the others escape.

They arrive in a deserted native village, where everyone except Jack decides to abandon the orchid quest and to build a raft to leave the jungle. After unsuccessfully trying to convince Gordon to continue the expedition, Jack uses a poisonous spider to paralyze him, and an anaconda devours him a few moments later. Hearing his screams, the others go help him while Jack steals their raft, then he goes find the orchids.

Later, Jack succeeds to find the blood orchids above an anaconda pit. The rest of the team comes to recover the raft, but Jack points a gun on them and oblige them to accompany him to the orchids. He then shoots Bill in the arm and forces Sam to retrieve the orchids. However, after she did it and gives the backpack containing the orchids to Jack, Bill attacks him and the backpack falls into the pit. Jack manages to beat Bill and tries to seize the backpack, but his spider escapes its jar and paralyses him. He falls into the pit and is devoured by the anacondas. 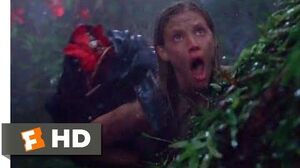 Anacondas 2 (2004) - The Snake Pit Scene (9 10) Movieclips
Add a photo to this gallery
Retrieved from "https://villains.fandom.com/wiki/Jack_Byron?oldid=3587207"
Community content is available under CC-BY-SA unless otherwise noted.