Pursuing and killing criminals who are involved in his case.

To find his brother's killer (succeeded).

Jack Carter is the title character and protagonist villain of the 1971 British crime film Get Carter.

He was portrayed by Michael Caine in 1971 film, and Silvester Stallone on 2000 remake.

Jack Carter is a mobster working for a gang in London but originally came from North of England. At the start of the film, he travels home to Newcastle after the death of his brother Frank. Jack soon determines that his brother was murdered. He follows an old rival named Eric Paice to the home of crime lord Cyril Kinnear.

Jack finds he is surprisingly welcome, but Eric warns him to stay away. Soon, Jack's boss in London sends a couple of men up to make sure that Jack doesn't interfere. Jack soon kills them. Shortly afterward, he tracks down a businessman named Cliff Brumby, who tells Jack that the car accident which killed Frank was a result of the alcohol being forced down him. Brumby also mentions that Cyril Kinnear is behind it, but Jack still kills Brumby by throwing him off a high story car park.

Of course, Jack has already blown the whistle on Kinnear and he is arrested the following morning. Meanwhile, Jack chases Eric along with a beach until he is exhausted. Jack makes Eric drink a bottle of whiskey in the same way that Eric made Frank do. To finish him off, Jack beats Eric to death with his shotgun. Before Jack can throw his gun in the sea, he is shot dead by a sniper and the waves wash around his corpse.

Jack Carter serves as the central protagonist of the 2000 American crime thriller remake film Get Carter.

Mob enforcer Jack Carter returns home to Seattle, Washington when he learns that his brother, Ritchie, has been killed in a drunk driving accident. While he starts investigating Ritchie's murder, his mob partner in Las Vegas, Con McCarty, covers for him with the mob boss, Fletcher. It also comes out that Carter has been having an affair with Fletcher's girlfriend, Audrey. At his brother's funeral.

Jack meets his niece, Doreen, and has a strained and emotional conversation with his brother's widow. He also speaks with Eddie, a friend, and coworker of Ritchie's, and he also notices a beautiful woman, Geraldine, who has come to pay her respects. She is evasive and cryptic about how she knew Ritchie and what the extent of their relationship was. At the wake, Jack continues to question mourners and well-wishers about what really happened to his brother, which draws the ire of Ritchie's widow. He also talks to Doreen while they sit smoking on the front stoop and she states that Ritchie rarely drank and would never have driven while intoxicated. Earlier at the funeral, Eddie also stated that Ritchie rarely drank and that he was most certainly not involved in illicit activities.

His first stop in his investigation is with loan shark Cliff Brumby, the owner of the club that Ritchie managed. However, Brumby claims that he does not believe Jack's allegations of murder, but does tell him that Ritchie was having an affair with Geraldine, an associate of local boss Cyrus Paice.

Jack questions Paice, though he is unable to get any useful information from him. Jack follows Paice, who unknowingly leads him to Jeremy Kinnear, a wealthy computer mogul who had hired Cyrus to discreetly procure beautiful women for him and the parties he throws, so as to better preserve his "professional" and squeaky-clean image. However, Cyrus now manipulates and controls Kinnear and forces him to run Cyrus's pornographic websites, blackmailing him with the understanding that if the general public were to become aware of Kinnear's proclivities it would irrevocably damage his public persona. Although Carter cannot get any straight answers, he continues to pursue the truth, and he carefully examines the surveillance tapes from Brumby's club, looking for any sort of clue.

After getting a call from Audrey, who breaks up with him, Con and a fellow gangster from Las Vegas track Jack down and confront him after Jack tells Fletcher that he is done with Las Vegas. After knocking both of the men out during a short and fierce fight in an elevator, Jack has a talk with Doreen about what happened in the video and comforts her, telling her she is a good person.

Intending to settle the score, Jack embarks on a path of vengeance. He gets a frantic, apologetic call from Geraldine, who tells him that she did know Doreen was Ritchie's daughter and that Cyrus is coming to kill her. After he finds Geraldine's body, Carter heads to Eddie's apartment to interrogate him. He demands to know why Eddie drugged and raped Doreen, as she trusted him as a friend. Eddie tells him that Cyrus is at a party at Kinnear's and Carter throws him off the balcony to his death.

Con and the other Vegas gangster have tracked down Carter outside of Eddie's apartment and a car chase ensues. The chase culminates in a game of chicken, which Carter wins when the car Con is in swerves and crashes violently, presumably killing the mobsters. At Kinnear's house, Carter confronts Cyrus, who tells Jack that he should be going after Kinnear because Kinnear is the man behind Ritchie's murder.

Cyrus starts to walk towards the glass doors and Jack attempts to hit him from behind, but Cyrus sees him in the reflection and ducks. Jack crashes through the doors and is unable to recover as Cyrus then pummels him to the ground. However, Cyrus makes a comment that Jack's brother put up more of a fight than he did, thereby admitting that he was involved in his brother's death. Cyrus then walks away and joins some women on the busy dance floor.

Bloodied, Jack gets up and follows Cyrus to the dance floor for a second confrontation, stating "You should finish what you start." Cyrus agrees, and as it seems as though he is turning to walk away again but he tries to sucker punch Jack, but Jack floors him with one punch. Jack proceeds to brutally beat Cyrus as he is lying on the floor. Jack then pulls his pistol and points it directly at Cyrus's face. It seems as though Jack is going to pull the trigger and kill Cyrus, despite a room full of witnesses, but he changes his mind and leaves him bloody and unconscious, though he may be comatose or dead from the beating.

He then confronts Kinnear, who says that all he told Cyrus to do was get the disc back from Ritchie, not kill him and that it was Cyrus and Brumby who committed the murder. Carter decides to show Kinnear mercy.

Carter catches Brumby attempting to steal the disk from his rental car. Brumby admits that he was involved in the murder, and warns Jack that killing him will force him to run for the rest of his life. As Brumby is walking away Carter calls out to him, but Brumby says he won't turn around. Jack shoots him in the back.

After settling the score for his dead brother, Carter meets Doreen one last time at Ritchie's grave. He is cleanly shaven now and explains to her that he has to go away for a while. He tells her to remember that she is special and they say their goodbyes. Carter is next seen getting into his car, and opening a map that leads to Las Vegas.

Carter appears in 1969, the second volume of The League of Extraordinary Gentlemen: Century, as an assassin working for crime boss Vic Dakin. He eventually crosses paths with Kosmo Gallion, the host of Oliver Haddo and shoots him dead, severing Haddo's tie. 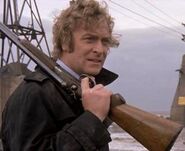 Retrieved from "https://villains.fandom.com/wiki/Jack_Carter?oldid=3471314"
Community content is available under CC-BY-SA unless otherwise noted.