He was voiced by the late Paul Frees, who also played Burgermeister Meisterburger and Uriah Caw.

Jack Frost was envious of how the children loved playing with Frosty the Snowman, and he thought that he could do better than Frosty. When Crystal was with Frosty, Jack Frost sends out a gust of icy wind, and it blows Frosty's hat off, seemingly killing him. When he was gloatfully singing "No more Frosty!," Crystal kisses Frosty, and this reanimates him. While baffled, he angrilly throws Frosty's hat which returns to its rightful owner. When the kids made a snowparson (since Parson Brown stated that he could not wed snowpeople, but real people) Jack Frost furiously returns. Crystal later appoints him as the best man for the wedding, and Jack agrees to do so, even yelling out "Happy Birthday!" much like Frosty and Crystal. After the wedding, the temperature begins to increase. Jack offers to make it an "endless wonderland", and bumps the temperature back down. However, he soon regrets it, because if it were winter all the time, the trees and plants wouldn't grow. He then leaves to go to the North Pole, along with Frosty and Crystal, and keeps them cool while on Santa's sleigh. 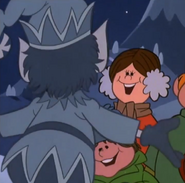 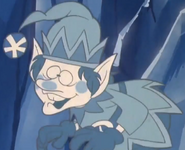 Jack Frost, thinking.
Add a photo to this gallery

Retrieved from "https://villains.fandom.com/wiki/Jack_Frost_(Frosty%27s_Winter_Wonderland)?oldid=4281260"
Community content is available under CC-BY-SA unless otherwise noted.