Get revenge on Sam Tiler for locking him up (failed).

Kill anyone who gets in his way (partially succeeded).

Jack Frost is the titular main antagonist of the 1997 horror comedy film of the same name, and its 2000 sequel Jack Frost 2: Revenge of the Mutant Killer Snowman.

Jack Frost was a serial killer and rapist who was transformed into a living snowman via chemical waste - he is a parody of horror movie monsters in general. Capable of performing many wild and crazy stunts with his new form and practically immortal Jack Frost terrorized the world in his quest to get revenge on the officer responsible for stopping him when he was still human.

He was both portrayed and voiced by Scott MacDonald.

On a snowy December night, a state execution transfer vehicle crosses into the quiet backwater town of Snowmonton. Inside is a serial killer named Jack Frost, who eluded police for years and left a trail of 38 bodies across five states before finally being arrested by the sheriff of Snowmonton for his dangerous actions. Frost is scheduled to be executed at midnight but due to the weather, a tanker containing genetic material collides with the prison truck, freeing Jack. As he tries to escape, the acid contained within the tanker breaks free, melting Jack's skin and skeleton. Shortly after his death, Jack's remains are fused with the snow.

Sheriff Sam Tiler is still haunted by his memories of Jack Frost. Despite news reports of Jack's demise, Sam cannot forget Jack's threats of vengeance. The sheriff's fears soon prove to be founded when Old Man Harper is found murdered. Soon afterwards, a local bully named Billy and his ski patrol gang are also killed. According to the sheriff's son, Ryan, a snowman caused the deaths. Billy's parents Jake and Sally are then murdered. Paul Davrow, the sheriff's friend, witnesses the murders, but no one believes him. Sam has his deputies lock him up.

FBI Agents Manners and Stone arrive in Snowmonton and convince Sam to put the town on 24 hour curfew, sending his officers out to gather all the townspeople. One of the officers named Chris Pullman is killed when Jack Frost runs Chris over with a police cruiser. Billy's older sister named Jill and her boyfriend Tommy sneak into the sheriff's home to steal his wine and have sex as payback for her brother's death, but Jack kills Tommy by impaling him through the head with an icicle and pretends to be bath water to lure in Jill, solidifying around her and uses his carrot to rape her to death.

Jack Frost returns with the police cruiser to the station, finally confronting Sam. Agent Stone reveals himself to be a representative of the genetic research company that created the acid and reveals that the snowman is a mutated Jack Frost. He also reveals that the human soul exists as a chemical and that the acid was going to be used to contain DNA in case of a nuclear holocaust. They attempt to destroy Jack by blowing him up by releasing aerosol cans in the police station and firing a bullet at him, but to no avail. They then use blow-dryers to drive Jack into a furnace, which evaporates the snowman. Unfortunately, Jack condenses, killing Agent Stone and wounding Agent Manners. Jack traps Sam and his son, Ryan within his car, but the sheriff escapes by inadvertently throwing the oatmeal his son made him at Jack, burning the snowman's head. His son, not wanting his father to be cold, put antifreeze in the oatmeal, believing it could help keep the oatmeal from getting cold.

Sam tells his friend, Paul Davrow to fill the bed of his truck with antifreeze. Jack chases Sam through the halls of a church and finally catches him, driving an icicle into his chest and almost killing him. The truck full of antifreeze arrives just in time, however, and Jack and Sam crash through a window and into the truck's bed. Jack Frost melts in the antifreeze, and afterwards, the antifreeze is poured back into the containers, and then buried deep under the ground of Snowmonton. Sam's wife Anne, realizes that the state police are on their way. When Paul asks Sam what they are going to tell them, Sam says, "we'll tell them that it's too late". However, one of the containers is shown to be bubbling, suggesting that Jack is contained as a liquid, and is still alive.

Sam Tiler has been struggling to recover from the encounter with the mutated snowman known as Jack Frost (much to everyone else's disbelief and humor), ever since he rampaged through his hometown last Christmas. To get away from the stress, Sam's wife, Anne suggests a tropical vacation in a cabana far away in the Pacific for the wedding of his deputy, Joe Foster and his secretary Marla. Sam reluctantly agrees, after reinforcement from his doctor.

Meanwhile, the FBI has dug up the antifreeze used to dissolve Jack in the first movie, attempting to test it for remains of the genetic material. One of the janitors accidentally spills a cup of coffee into the tank of antifreeze, waking Jack up and causing him to reform and break free. He heads for the tropics, due to the idea that since Sam was wounded by Jack in the first movie, and his blood dripped into the antifreeze used to dissolve him, Jack is linked to Sam's psyche.

Sam, Anne, Marla and Joe, arrive at the tropics to a greeting by the eccentric Colonel Hickering and his assistants Captain Fun and Bobby. The festivities quickly begin, but things get deadly when Jack washes ashore and kills three ladies by transforming himself into an ice anvil to crush Ashlea, impaling his icicles into Paisley, and stabbing a pair of tongs into Rose's eyes. The next morning, the Colonel discovers the bodies and tries to cover up the whole mess, as he does not want this to ruin his resort. However, the island's manager, Agent Manners suspects that Jack has returned.

Jack continues his rampage, killing a beach model named Sarah by making her head explode (after she swallows him into her body as a piece of ice) and stabbing her cameraman Greg to death with his carrot nose. Sam begins to suspect that something is amiss when he runs into Manners, who agrees to an alliance in order to stop Jack Frost. Sam, Captain Fun, and Manners stage a trap to capture Jack. This fails as the snowman they capture was really the Colonel in costume.

Jack, after slaying another beach model named Cindy by drowning her in the pool by freezing the surface, decides that the tropics are a bit too warm and freezes the place, causing it to snow and freeze the lifeguard. The party guests begin to play around in snowball fights when Jack enters the fray, killing at least another dozen. Sam, Anne, Marla, Manners and Joe lock themselves up in their room, using anti freeze to keep Jack at bay.

Sam and Manners decide to find help, and end up finding a room where the Colonel, Captain Fun, and Bobby have barricaded themselves in. Sam asks the three of them where they can find antifreeze, to which Bobby suggests they use the coolant for the generator, which uses the same material. Luring Jack into a trap, Sam once again tricks Jack into a pool of coolant. Unfortunately, this does not work, as Jack has become much more resilient to the antifreeze due to his time in the lab. Jack spits out a snowball and flees, followed by Manners, into the woods.

Sam, Anne, and the others observe the snowball and it "hatches" and becomes a baby snowman, who kills Captain Fun. They trap the snowman in a blender and try many different ways of killing it, all of which fail. Meanwhile, Manners has followed Jack to a shed, where he sees that Jack has spit up many, many snowball children. He calls the others and tells them what he has seen, but before leaving he is attacked and devoured by the tiny snowmen.

Sam, in panic since the antifreeze does not work, is pushed to the side as Anne takes charge in order get Joe and Colonel to go around the island to trap as many of the snowmen as they can until the supply boat (which is coming to the island to drop off more supplies) comes, while Bobby, Marla and Sam wait back in the kitchen. During the search, the snowmen kill seven more tourists. Eventually, Anne realizes that they can be killed by bananas, due to Sam being allergic to bananas. As a result, Jack would share the same vulnerabilities, since he absorbed some of Sam's genetics in Snowmonton. Everybody soon makes a big batch of banana smoothies, which they then use to kill the tiny snowmen. However, one of them crawls back to Jack, fatally wounded. Jack picks it up and observes it, and then watches it slowly die in his arms. He then sheds a tear mourning the loss of his new family.

This angers Jack, who stabs Colonel through the head with an icicle from behind and slits Bobby's throat with another icicle. Marla and Joe flee and lock themselves in the freezer with Captain Fun's body, while Anne is attacked by Jack. Sam snaps out of his paranoia and shoots Jack with a banana attached to an arrow, causing him to explode. Anne and Sam embrace each other, and walk towards the ocean, prepared to leave the island with any of the other surviving guests.

During the credits the two sailors on the supply boat are crushed by a giant carrot, implying Jack is still alive and has become kaiju-sized. After the credits roll, we're shown that Joe and Marla were accidentally left in the freezer by Sam and Anne, and it's implied that the couple froze to death in the freezer.

Jack Frost 2: The Revenge of the Mutant Killer Snowman 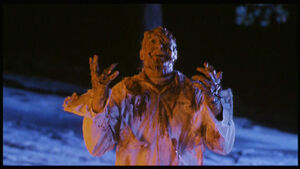 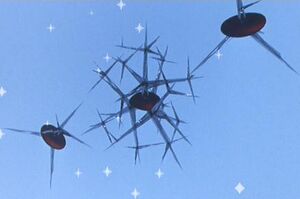 With Jack's remains fused with the snow; his DNA is turned into snowflakes, thus turning him into a snowman. 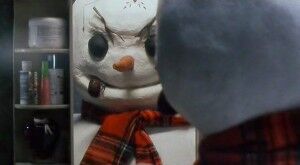 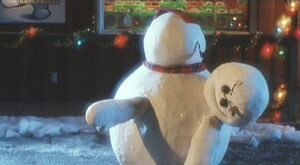 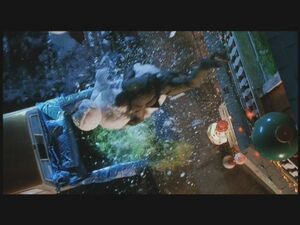 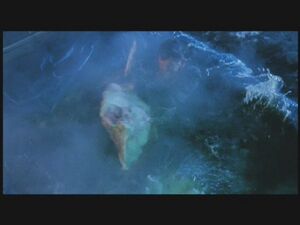 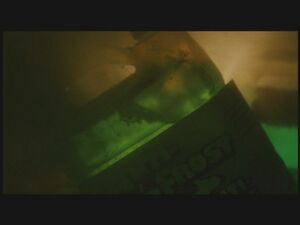 Jack contained as a liquid, but still alive.
Community content is available under CC-BY-SA unless otherwise noted.
Advertisement