Co-founder of the Shadow Company

Sub-Commander Jack Joshua is the secondary antagonist in the 1987 film Lethal Weapon, the first installment of the Lethal Weapon film series.

He is General Peter McAllister's second-in-command and the co-founder of the Shadow Company.

He was portrayed by Gary Busey, who also portrayed Krill in Under Siege and Ty Moncrief in Drop Zone.

Mr. Joshua first appears where some of the Shadow Company henchmen bring in a man named Mr. Mendez, who wants to buy heroin from them. When Mendez asks who he is, he replies "You may call me Mr. Joshua".

Joshua and the henchmen then take Mendez to see General Peter McAllister, who asks Mendez if he smokes. Mendez replies he does, then the General asks for a cigarette lighter. Irritating him a second time, Mendez pulls it out and the General turns the lighter on. He then asks Joshua to bring out his left arm, to which he puts his arm over the flame of the lighter. His arm doesn't get burnt, to which the General tells him to have Endo to look at that. The General reminds Mendez about doing business with them making a purchase of heroin, in which Mendez says, "Yes". The General then tells Mendez the shipment of heroin will be ready on Friday, and not to play any tricks while trying to buy the drugs from them or else he will have to speak with Mr. Joshua, proving the latter is no laughing matter.

Run-in with the police

Later on, when LAPD Detectives Martin Riggs and Roger Murtaugh are trying to investigate the murder of Amanda Hunsaker and who blew up the house of a hooker named Dixie. A little boy named Alfred tells them that he saw a man with blond hair and a special forces tattoo on his arm (like Riggs') changing the heat meter at Dixie's house. This hints that the man was Joshua. Afterwards when Riggs and Murtaugh go to confront Amanda's father, Michael at his house, Mr. Joshua shows up in a helicopter and shoots 4 rounds and kills Michael Hunsaker. Riggs tries to shoot at both Joshua and the helicopter, but misses and he escapes. Joshua then radios to McAllister and tells him that he killed Hunsaker, but didn't get the chance to kill the cops and that they might know something. The General, although disappointed with his right hand man, tells Joshua to come home.

Later that night, as Riggs and Murtaugh are out doing some more investigating, a car pulls up and Mr. Joshua, who is in the backseat, shoots Riggs and the car drives away but at that moment, does not know he survives with his bulletproof vest. Later on, Joshua calls another LAPD police officer at the station, Sergeant McCaskey, and pretends to be a KCOP News reporter in order to get some information on the shooting of Martin Riggs, to which McCaskey falsely tells Joshua that Riggs was "shot and killed," to which he says, "Oh, okay. Thank you. We'll send someone right over." After hanging up, not knowing McCaskey deceived him about Riggs' fake death, Joshua feels unsure if Roger Murtaugh will talk about the next drug shipment, but McAllister assures him that since they have Rianne, he will have no choice but to talk. Joshua calls Murtaugh at his house and tells him they have his daughter Rianne, and tells Murtaugh to meet them tomorrow at El Mirage Lake in Victorville if he wishes to see her alive again.

Meeting at El Mirage and Capture of both cops

The next day at sunrise, Joshua and his henchmen meet Murtaugh in the desert while unknown to them, Riggs (who faked his death) hides nearby with a sniper rifle ready for action. Hiding in a limo, at first he witnesses Gustaf exchanging words with Murtaugh. Once the detective pulls out a grenade, as instructed, Joshua believes he's bluffing. Murtaugh tells Joshua and his men to let Rianne go or else he will kill them all, but Joshua tells Murtaugh that he's grounded, as he's outnumbered by all their weaponry, and Riggs is gone. After telling him he is not going to kill everybody in the desert, Joshua shoots Murtaugh grazing him in the left clavicle, causing him to drop the grenade. It goes off, and being fooled, it is only a smoke screen bomb. Then Riggs shoots at some of the men, and Joshua realizes Riggs is still alive. But before he can shoot Joshua, he is captured by Gen. McAllister. McAllister then radios Joshua and tells him that he's captured Riggs and Joshua tells his henchmen to go after Rianne (who fled in the limo) while his henchmen surround Murtaugh using all their firepower against him. They are both captured and taken to Shadow Company's secret hideout. Mr. Joshua and Endo then tie Riggs up and threaten to shock him with an electric sponge shocker if he doesn't tell them about the shipment Hunsaker told him and Murtaugh. But Riggs tells them both that Joshua shot and killed Hunsaker before Hunsaker could tell the rest about the shipment, but Joshua doesn't believe Riggs and has Endo shock Riggs with the electrified sponge. He continues to demand Riggs to tell him about the heroin shipment, but doesn't get anywhere with him. When Joshua leaves, Riggs breaks Endo's neck with a chokehold to death and escape his torture chamber, and he throws Endo's lifeless body at McAllister's henchmen and rescues Murtaugh and Rianne.

After rescuing Murtaugh and Rianne, Riggs begins a brief shootout in Shadow Company's club. Joshua sees this, grabs a rifle, and fires at Riggs and Murtaugh, but cannot kill them. Joshua escapes the building and steals a lady's car, still armed with a rifle, and grabbing her hair to pull her out of the car. When Riggs sees him driving away, Joshua grabs his rifle again and shoots at Riggs who provides cover behind a car, though Joshua takes out its tires. Riggs chases after Joshua who leaves the city and gets onto the freeway. Joshua crashes the car and escapes from Riggs who tries to catch him. Even after suffering an explosion on the hood from Riggs' submachine gun, he manages to escape by stealing another car. Along the way to Murtaugh's home, he encounters two police officers, who ask if they could help him, but he says, "No, thank you" and shoots them both dead with his pistol before they can do anything else. This forces their squad car to crash into a fire hydrant splashing water everywhere. Joshua shoots his way into the home (no one was home) and shot a TV in the process shouting "GODDAMN CHRISTMAS!" Before he could go upstairs to look for anyone else there, he found a note on the Christmas tree saying "Dear BAD GUYS! No one here but us COPS SORRY! the GOOD GUYS." The same police car crashes through the window and Joshua shoots the car, only to see no one was inside. A gun points towards him and it is Riggs, who disarms him and escorts him out of the house.

Showdown with Riggs and death

After Murtaugh pats Joshua down and removes his coat, Riggs asks Joshua, "What do you say, Jack? Would you like a shot at the title?", to which Joshua replies, "Don't mind if I do". Riggs and Joshua then fight on Murtaugh's lawn as more LAPD personnel arrive. Riggs and Joshua fight hard using skilled martial arts. At first, Joshua gets the upper hand and pummels Riggs. He even attempts to strike Riggs with a broken sign post, but Riggs is aided by Murtaugh being given a baton, and he uses the baton to block the strike. Joshua has him in held face down in the puddle, but Riggs headbutts him backwards, and gets down on the ground. Finally, Riggs manages to choke Joshua with a triangle chokehold, but doesn't kill him, leaving Joshua slightly unconscious on the ground. Murtaugh then orders two cops to get Joshua off his lawn. But as the arresting officers are attempting to handcuff him, he easily overpowers them both resisting arrest and steals one of their guns and attempts to shoot Riggs and Murtaugh. But before that can be done, both Riggs and Murtaugh notice this and draw out their guns and shoot Joshua simultaneously, killing him instantly. 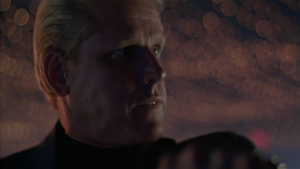 Mr. Joshua showing his strength by putting a lighter to his arm. 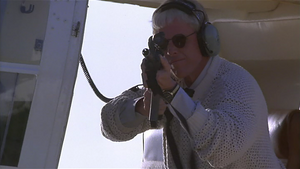 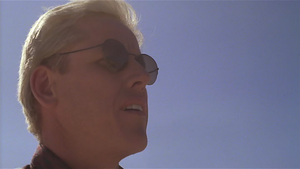 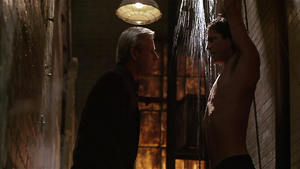 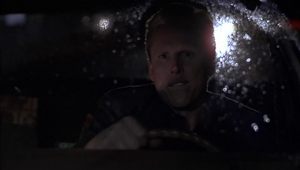 Mr. Joshua fleeing in his car. 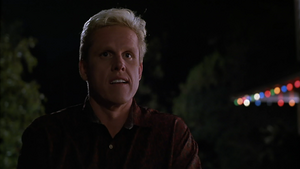 Mr. Joshua about to engage in a fistfight with Riggs. 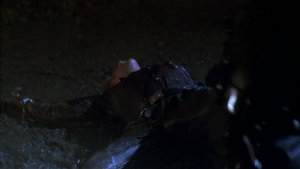