Member of the U.S. SOCOM (formerly)

Playing with his knife.

He was voiced by Jim Ward, who also voiced Captain Qwark in Ratchet & Clank, Torrance in Treasure Planet, Zhencha in Disney's Mulan, and Hydros in Disney's Hercules.

Then a member of the U.S. SOCOM (U.S. Special Operations Command), Krauser was sent along with Leon S. Kennedy to track down the infamous drug dealer, Javier Hidalgo, who had apparently been in contact with a former Umbrella researcher. Because the country Javier was in was too small to do anything about him and the fact he had defector control of the area around his mansion, the government sent Krauser and Leon in as a secret military detachment so as to prevent any possible biohazards that could occur. Shortly after their arrival, Krauser told Leon that he didn't believe in BOWs and they proceeded to head into the nearby village to meet an informant.

However they found the town was suffering from the effects of a T-Virus outbreak and they had to fight their way through zombies and mutated animals. They found their informant mortally wounded, who said something about a girl before dying and being dragged underwater by some unseen creature. They continued on until they came across a girl, Manuela, and were forced to battle a vicious amphibious monster.

Afterwards Manuela guided Krauser and Leon through the dam and found out that she was Javier's daughter and that she had been given the T-Veronica Virus to counteract a fatal disease she had contracted. They encountered Javier, who opened a floodgate and washed Leon and Krauser away. They managed to get back through the dam and met up with Manuela again, who agreed to bring them to her father's mansion. Upon arriving there, Krauser, who was concerned about Manuela transforming and becoming violent due to the T-Veronica virus inside of her, found out from Leon that he had been sent in specifically to fully eliminate the virus. Though Krauser agreed to help Leon, he began to feel envious and spiteful of Leon's status.

As they fought their way through the mansion, he found himself agreeing with Javier's sentiment of "becoming stronger to survive" and growing hateful towards Leon, as well as fascinated by the T-Veronica virus. As they continued down into the depths of the mansion, they discovered that the reason why Manuela was able to keep from mutating was because Javier had been kidnapping girls from the village and transplanting their organs into his daughter so as to keep the virus at bay. He then sent out the amphibious monster they had run into earlier and as he was trying to protect Manuela, Krauser's left arm was badly damaged. They eventually discovered that the creature they were fighting was Manuela's mother, mutated by the T-Virus.

After Javier's fusion with his T-Veronica infected plant, Krauser, Leon, and Manuela all fought him as one. As the fight continued, Krauser became convinced that to destroy the virus would be a terrible mistake. He decided that he needed to become more powerful and Leon wanted to destroy the virus because he was a coward. After finally destroying Javier, Krauser would not recover from his arm injury and was dismissed from the military. Thus he sought out Albert Wesker, who he believed could give him the strength he desired.

Krauser eventually faked his death and began working for Wesker and the Organization. As one of their employees, he eventually met Ada Wong, whom he came to be highly suspicious of. Krauser was eventually assigned to infiltrate the cult, Los Iluminados, and steal one of their Plagas parasites, preferably a Control Plaga. He succeeded in cementing himself in the group by kidnapping the president's daughter, Ashley Graham, and bringing her to the cult's leader, Osmund Saddler. However, Krauser, intrigued by the power of the Plagas, took one into his body, which gave him the power to transform his left arm into a large blade like appendage. Though Krauser's orders were to work with Ada on this mission, he was convinced that she would betray Wesker, which was only reinforced when she stopped him from killing Leon Kennedy. Eventually Krauser faced off against Leon for a final battle in a series of ruins with two insignias needed to open the gate hidden in two different places and the third one in Krauser's possession. At first, he attacked Leon with a TMP and flash grenades, but after the

government agent got the second insignia, he locked both of them in a tower and activated a bunch of C4s set for two minutes. Krauser then made his arm mutate into a giant bladed claw like appendage and fought Leon, only to be defeated. Leon then took the insignia from him and escaped as the C4s detonated, though Krauser survived this. After Leon and Ada met up near the prison, she encountered the former millitary agent on a set of building tops, where he attempted to kill her.

However his brute force was no match for Ada's arsenal and Krauser fell for the last time. Even tought Ada never gave the Plaga sample to Wesker, he still managed to recover a Dominant Species Plaga sample from Krauser's dead body, probably extracting tissue samples to grow his own. Despite attempting to kill him and as the kidnapper of Ashley, the cause of the Los Iluminados Incident, Leon would always remember that Jack Krauser was a good man once.

Krauser is a skilled knife wielder and uses a very rugged fighting style, along with the ability to use a variety of fire arms. Even when not mutated, he can still perform incredible feats of agility, such as backflipping onto platforms and jumping over six feet. After mutating, Krauser is able to use his mutated arm as a shield and a weapon and his abilities are boosted to a superhuman level. He can dodge bullets and execute powerful charges. 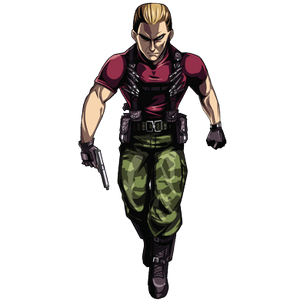 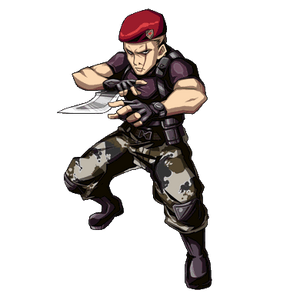 Jack Krauser in Minna to BIOHAZARD Clan Master (RE4). 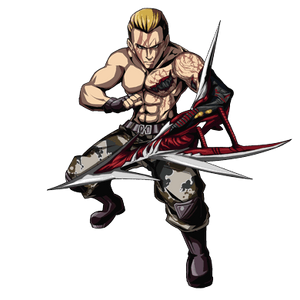