Villains Wiki
Register
Don't have an account?
Sign In
Advertisement
in: The Simpsons Villains, Corrupt Officials, Cartoon Villains,
and 28 more

Skilled with a flamethrower

Vengeful Disciplinarian
Jack Lassen is the main antagonist of The Simpsons episode "Blazed and Confused".

He stands out as one of the show's more active antagonists who is openly criminal and homicidal. He also grows to become a nemesis to Bart Simpson and, briefly, Sideshow Bob's partner-in-crime.

He was voiced by Willem Dafoe, who also played Raven Shaddock in Streets of Fire, Eric Masters in To Live and Die in L.A., John Geiger in Speed 2: Cruise Control, Max Schreck in Shadow of the Vampire, the Green Goblin in Sam Raimi's Spider-Man trilogy and Spider-Man: No Way Home, Armando Barillo in Once Upon a Time in Mexico, Nikolai Diavolo in James Bond 007: Everything or Nothing, George Deckert in xXx: State of the Union, Lord Cob in Tales from Earthsea, Rat in Fantastic Mr. Fox, J.G. Jopling in The Grand Budapest Hotel, Ryuk in Netflix's Death Note, Thomas Wake in The Lighthouse and Clement Hoately in Nightmare Alley.

Jack Lassen begins as a new teacher at Springfield Elementary School and quickly shows himself to be unstable, scarring himself with a letter opener in Principal Skinner's office and later making Nelson cry after brutally harassing the would-be-bully after Nelson tried to make fun of his name.

Despite his dangerous nature and Milhouse advising Bart to "abort prank" Bart decided to try his luck and attempted to scare Lassen with a harmless prank. This backfires horribly and Lassen shaved Bart's hair as punishment, despite concerns by Marge the bullying continues and Bart is constantly humiliated and even electrocuted.

Finally growing tired of his tormentor, Bart formed a plan to rid himself of Lassen and spied on him, learning of the "Burning Guy" celebration (a parody of the "Burning Man" Festival) in which Lassen would perform the honor of burning the statue.

Thus, Bart and Milhouse team up to cover the "Burning Guy" statue in fire retardant, which causes Lassen to be publicly humiliated during the celebration as he is unable to set the statue on fire.

Unfortunately, while laughing at Lassen's well-deserved punishment, Bart accidentally knocks over a canister of fire retardant, which rolls over to Lassen and reveals Bart's involvement. This prompts Lassen to go on a murderous rampage with a tuba-based flamethrower, chasing Bart up to the top of the "Burning Guy" in plain view of the entire crowd, which the intention of burning Bart alive.

Homer tries to save Bart by launching himself off a catapult and while he failed at his goal of knocking Lassen off his crash into the statue did cause the structure to collapse, Lassen is then captured by the other festivity-goers, who form a "human prison" around him.

Later Lassen is fired from his teaching position and finds work as a prison warden (a job that he claims would reward his sociopathic tendencies). While working, he comes across Sideshow Bob and the pair almost team up upon stating mutual hatred of Bart but quickly refuse such an alliance when Lassen suggests the pair "share" in the act of murdering Bart, Sideshow Bob wishing to do the act himself. 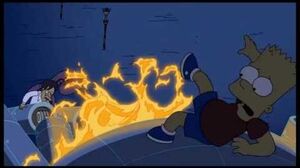