Owner of Mana One

Make sure the project is a success so his money does not go to waste (semi-succeeded).

Jack Morris is the secondary antagonist of the 2018 sci-fi thriller film The Meg.

He is a greedy billionaire who funded the underwater research facility, Mana One. His company was inadvertently responsible for bringing The Meg to the surface.

He was portrayed by Rainn Wilson, who also voiced Gallaxhar in Monsters vs. Aliens and Gargamel in Smurfs: The Lost Village.

Jack Morris is a Caucasian male with light brown hair and grayish-blue eyes. He is always seen wearing Nike sneakers with a cap.

Jack Morris is very childlike and insecure about being the least smartest person in the Mana One group, so he makes up for it with arrogance and humor. He's also very greedy and selfish, as shown when he refuses to shut down the project despite losing several members of the team. When it seems like he finally feels remorseful and is ready to kill The Meg, his sympathy is just a cover for not wanting legal troubles.

Five years after a diving incident, Jack Morris funds the building of an underwater research station known as Mana One. With Dr. Zhang, he comes in helicopter to see the progress of the underwater station's construction and is shown to be very impressed. He feared, however, that his money had been used for nothing in case nothing was found during the ensuing underwater expedition.

The group in the submarine is then attacked and Morris and the team on the surface decides to solicit Jonas Taylor. The latter manages to bring them back to the station and Toshi dies. During a meeting between the members of the lab, Morris selfishly complained about the money wasted during the attack on the Meg (returned to the surface). The shark also destroyed three boats after its return and the team decides to go there. They manage to kill a large shark they think is the Meg and Morris tells Zhang that everything is fine. The doctor contradicts him however by saying that it ended badly for Toshi and science. Bored by his words, Morris walks away, grumbling.

The real Meg then suddenly arises, overturns the boat and kills Heller, The Wall and Zhang. The survivors take a canoe still standing and Morris contacts his men. The latter arrive by helicopter and send a transmitter on the giant shark which immediately moves away from the canoe.

After this huge incident, at Mana One, Morris claims to have warned the Chinese government and the authorities of the presence of the Meg. He is lying saying that destroyers were sent to kill it.  He finally apologized to everyone for the death of certain members. Although he seems sincere on this, he uses other arguments to hide his real plans.

The same evening, Morris leaves Mana One by helicopter and obtains on board powerful dynamites to kill the Meg himself. The fact is that he hasn't contacted anyone about the Meg and does not want to have any problems with the law. In the middle of the ocean, Morris is on a boat and watches the charges being dumped on what he believes to be the Meg. However, when he goes to see the corpse, he realizes that his men killed a whale. Panicked, Morris orders the boat to leave but by the power of starting, he falls backwards then into the water. As he asks for help in vain, he sees the Meg rush straight at him and climbs on the corpse of the whale. The shark devours a part of the animal first, then jumps on Morris leaving only one hand outside of its jaws.

Morris joking with Dr. Zhang on the runway of the Mana One platform. 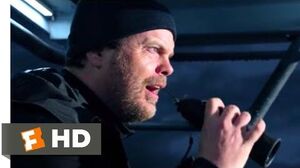