Jack O' Lantern is the main antagonist of the The Grim Adventures and Billy & Mandy episode "Billy & Mandy's Jacked-Up Halloween".

He is voiced by Wayne Knight, who also portrayed Dennis Nedry in Jurassic Park, Al McWhiggin in Toy Story 2 and Emperor Zurg in Buzz Lightyear of Star Command while in the video game he is voiced by Maurice LaMarche who voiced Father in Codename: Kids Next Door.

Jack was the village fool who would pull pranks on the villagers. The problem with Jack was, while he was a pleasant guy, he didn't know when to stop and his pranks ranged from harmless and annoying to dangerous and painful. Rumor had it, he would devise new pranks every evening and laugh himself to sleep at night. One day, the townspeople couldn't take it anymore and devised a prank of their own: the classic snake in a candy jar prank, signed it from Jack and sent it to the queen (who had no sense of humor). When the queen opened the gift from "Jack", she sent a knight out to kill him. Immediately, the Grim Reaper went to reap his soul, but Jack tickled him and stole his scythe and would only give it back if Grim had granted him immortality. When the deal was done, as punishment for tricking him, Grim decapitated him, ensuring that Jack would never show his face around town again, ever. Later on, Jack got himself a pumpkin and wore it as his new head. He still lived in his old house that was untouched by time and every Halloween Night, Jack emerged with a sack full of tricks and played terrible pranks on the people of Endsville.

Billy and Mandy's Jacked Up Halloween

While he was out Trick-or-Treating in Downtown Endsville, Billy ran up to Jack's old house and looked for candy. When Jack realized that Billy was carrying Grim's Scythe, he tricked Billy into giving it to him, brought demons from the Underworld to the surface world, and had them use pumpkins for bodies.

When Jack found Grim, he planned on using his Scythe to "return the favor," but Mandy tried to save Grim by devising pranks of her own only to be caught by Jack. Irwin instead was the victim of Mandy's pranks, which caused all of the possessed pumpkins to laugh themselves to death. When Jack was confronted by Grim, the former reminded him of the bargain they made. Grim told him he never goes back on his word, but Jack had overstayed his welcome and tickled him with his own feather, sending him with the pumpkin's spirits to the Underworld. Once there, Jack continued his old ways of pulling pranks, but it's implied at the end he got his pumpkin head squished by the demons living there, though he's still alive thanks to his eternal life.

Jack served as the boss of Mandy's level Squash Quash. He summons pumpkins with his taunts. 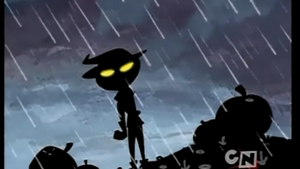 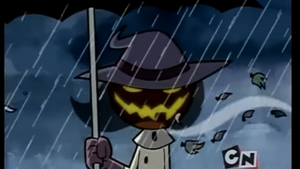 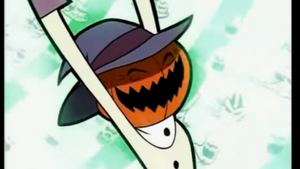 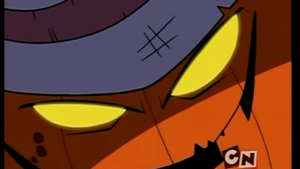 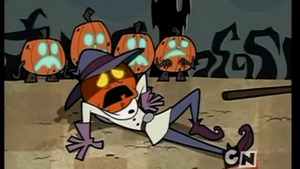 Jacks Breakdown as he thinks the knight has returned 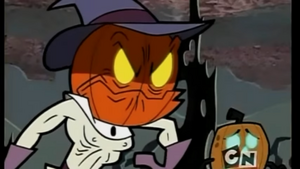 Jack's Mental Breakdown Before breaking into a fit of laughter 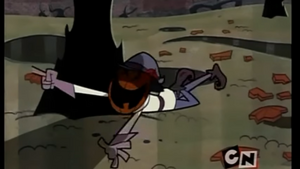 Jack in a fit of laughter 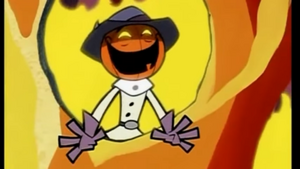 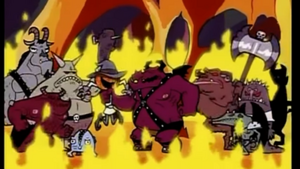 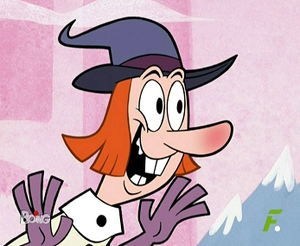 Retrieved from "https://villains.fandom.com/wiki/Jack_O%27_Lantern_(The_Grim_Adventures_of_Billy_%26_Mandy)?oldid=4030915"
Community content is available under CC-BY-SA unless otherwise noted.