Ruler of the Pangaea forest

Eat to survive, even if it means to cannibalize other T. rexes.

Kill Stumpy and take over his territory (failed).

Jack Palance (or just simply Jack) is a rogue cannibalistic Tyrannosaurus and the main antagonist in the Dinosaur Revolution episode "End Game" and the segment of the same name from the 2014 spinoff film Dinotasia, despite having little screen-time.

He is red with white pits and divots on his skull. He is also known for cracking his neck before killing or fighting another dinosaur.

In the beginning of End Game, 65 million years ago and thirteen years before the meteor that would wipe out the dinosaurs struck, Jack Palance and another T. rex named Stumpy fought on a beach over territory, but Jack defeated Stumpy by ripping off Stumpy's left arm and ate it. His bleeding rival fled from the scene.

Two years afterwards, as Stumpy and his mate Tinkerbell rest in the sun, their two babies, while playfully chasing after a Pachycephalosaurus, hear a noise coming from the forest and wander far from their nest out of curiosity. Jack is the source of the noise and devours the twins, leaving Tinkerbell heartbroken.

The next day, Jack spots his enemies eating a killed Triceratops and fights them for it. He was about to gain the upper hand by ripping off Stumpy's right arm, but Tinkerbell distracts him by biting his leg. Stumpy kills his nemesis by headbutting him onto a horn on the Triceratops, which impales him through his neck. Stumpy and Tinkerbell avenge the loss of their offspring by eating the dead cannibal. 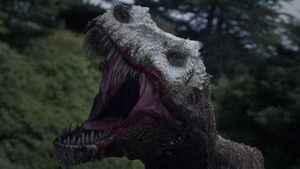 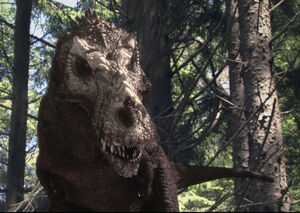 Jack Palance in the forest. 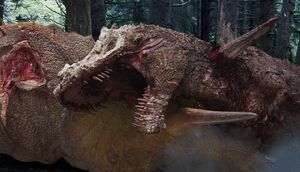 Jack Palance's death.
Add a photo to this gallery

Retrieved from "https://villains.fandom.com/wiki/Jack_Palance?oldid=3774468"
Community content is available under CC-BY-SA unless otherwise noted.