Jack Spicer is a self-proclaimed "Evil Boy Genius" and one of the main antagonists in Xiaolin Showdown.

He was voiced by Danny Cooksey in Xiaolin Showdown, and Eric Bauza in Xiaolin Chronicles.

Jack is constantly building different types of robots, the most common of which is the Jack-Bot. His first appearance was in "The Journey of a Thousand Miles" where he met the Heylin witch Wuya and learned of the mystical Shen Gong Wu. He says that he has wanted to rule the world since second grade. As mentioned above, Jack is an experienced robotic engineer, and he is not above sobbing in public or screaming in terror. Jack also gets minor nose bleeds when exposed to great heights rapidly.

Jack lives in his parents' basement, which he uses as his secret lab. His parents are never seen, nor were they mentioned that much in the series. However, it has been shown that his parents (or his father at least) appear to be involved in some high position or profession, as they appear to be relatively wealthy. He also has a blond cousin Megan, who is much younger than he and is aligned with the Xiaolin.

Starting with the second season, Jack becomes more of a scared, whiny fanboy than he was in the first season where he acts more as a psychotic villain beginner and was much calmer.

Examples of Jack's "evil heroes" are Chase Young and Hannibal Roy Bean. He looks up to those evil heroes and tries to form partnerships with them, usually ending up with him getting hurt.

At times, he has gone into the Ying-Yang World, losing his evil side and coming out as a "good Jack," who is quirky, spunky, dramatic, and what can only be described as the ultimate good. After this happened in "Saving Omi," Good Jack went back into the Ying-Yang World. He then used the Ring of the Nine Dragons to duplicate himself, and only one of these clones left. Because this clone only used the Yang Yo-Yo to leave, he regained his evil chi, essentially going back to normal Jack. Good Jack appeared again in the episode "The Life and Times of Hannibal Roy Bean" when regular Jack found the prison that held Hannibal Roy Bean. Hannibal tricked not Jack, but the monks, into letting him out by using the Moby Morpher to turn into Jack. Hannibal (still in disguise) wasn't found out until the monks ran into regular Jack as well as Good Jack. In order to identify the fake, they used the Ring of the Nine Dragons to reunite the two correct Jacks.

Later in the episode "Hannibal's Revenge" Kimiko disguises herself into looking like Jack in order to win a showdown. In the last episode Jack is left with his favorite Shen Gong Wu, the Monkey Staff.

Jack Spicer can best be described as "cowardly". While his ingenuity and sheer intelligence can be a force to be reckoned with and his strength isn't to be underestimated, his cowardly and meek personality keep him from achieving his goals. He is easy to be manipulated by other villains (mainly Chase Young  Wuya and Hannibal Roy Bean) including the Xiaolin Warriors, where to the point that he's been reduced to a mere nuisance in some episodes between season 2 and 3. To cover up his insecurities as a villain, Jack has employed a faux persona of being cool, confident, and in charge, this persona is almost always dissolved in the face of danger or greater evil. Although he's generally seen as a wimp, Jack has been shown to be a capable fighter who, with technology and actual skill, has posed as a serious threat to both the Xiaolin Monks and Chase Young himself.

His more pathetic qualities not withstanding, Jack can be very dangerous and manipulative, and he is not to be underestimated. In an alternate future, without Omi's guidance he became treacherous, ruthless, and cruel with little regard for human life, rulling the entire Earth as a vicious and oppressive dictator, forcing elderly people in gladiatorial arena's for his amusement, had his enemies in perpetual torture and had no qualms with crushing the weakened and aged monks to death. Despite his blatantly evil persona, it has been questioned by the Xiaolin Monks whether or not Jack is truly evil, with Omi believing (and eventually seeing) that Jack had good within him, somewhere.

While he is usually seen as a laughing stock by both evil and good alike, make no mistake, Jack Spicer can be a serious threat if seen unchecked or underestimated. While these occurrences are few and far between, they aren't unheard of.

In an alternate future in which Omi was not present, Jack Spicer completely conquered the world and imprisoned the Xiaolin Monks, Master Fung, Chase Young, Wuya and even Hannibal Roy Bean. In this future, he rules the Earth with an iron fist and can best be described as an utter tyrant. As the "Emperor of Darkness", he eventually kills off the aged Xiaolin Warriors after forcing them to be gladiators for decades on end.

This future is eventually undone when the two Omi's from both timelines touch each other, causing the timelines to merge into one.

The episode "The Sands of Time" briefly tales of a timeline in which Jack Spicer gained the "Sands of Time", a powerful Shen Gong Wu that allows the user to travel through time. While the timeline is never shown, "Old Omi" described Jack Spicer as being a threat to the entire universe in the timeline. Again, showing that Jack can be a serious threat if things go his way.

Super-Genius Intellect: As unbelievable as it sounded, in his own idiotic way, Jack's most dangerous weapon was his genius-level intellect. He was easily one of the top mortal minds on the planet as he was able to create hundreds of devices, including a working time machine and a Shen Gong Wu detector. His most frequently used robots were the Jack-Bots, floating robots, equipped with saws, machine guns and any other kinds of weapons. Time after time, it's shown that with Jack's immense intellect, he can pose a threat to not just the Monks or Chase Young, but to the entire universe if things fall into his hands.

Superhuman Strength: While no warrior, Jack has been shown to be a consistent match in hand-to-hand combat and has even bested in the monks in fair fights on a number of occasions. Notably, Jack gained the upper hand against "Robot Jack", who was a serious match for Omi. Jack has even overpowered Clay at least once, proving his overall strength. It can be said that most of his sound defeats stem from his cowardly personality rather than his lack of strength or even skill.

Jack has had many, many allies. In chronological order, they are listed here:

Jack Spicer with other villains 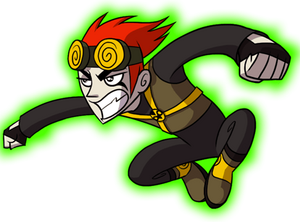 Jack Spicer in Xiaolin Chronicles
Add a photo to this gallery

Retrieved from "https://villains.fandom.com/wiki/Jack_Spicer?oldid=3558984"
Community content is available under CC-BY-SA unless otherwise noted.