Captain of the S.S Riptide

Jack The Reaper is the villainous mascot for the annual Halloween super store, Spirit Halloween. Jack first appeared for purposes of advertising the super store in 1985. Since then he has been featured on every single piece of merchandise of advertisement for the store and there exclusive products ever since. He has also appeared in the store's many themes and horror themed setups, that it is now known for. His design has changed very little through the years, with the only real change being making him less realistic and more stylized and cartoony.

Jack's design is very simple. Jack is a completely white skeleton that where's a black cloak with a hood. Jack has a large toothy evil grin and a single red eye. Not much is known about Jack's personality. However, we can gather that he is evil and sadistic, as he seemingly takes pleasure in the pain of others.

Jack, in the poster for Spirit Halloween 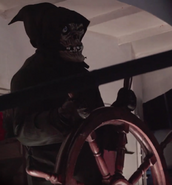