Villains Wiki
Register
Don't have an account?
Sign In
Advertisement
in: Partners in Crime, Spouses, Criminals,
and 49 more
English

Taking care of their piglets.

Utilize Humpty Dumpty's plot and later betray him in order to gain control of the Golden Goose (succeeded).

Jack and Jill are the main antagonists of DreamWorks' 23rd full-length animated feature film Puss in Boots, an spin-off of the Shrek film series.

They are a married couple and a pair of murderous outlaws. They secretly aid Humpty Dumpty on his scheme to get his revenge against Puss and want to gain the Golden Goose so they can become rich.

Jack was voiced by Billy Bob Thornton, who also played Lorne Malvo in Fargo, Jigo in Princess Mononoke and Willie Stokes in the Bad Santa movies. Jill was voiced by Amy Sedaris, who also voiced Bandit Princess in Adventure Time, Nocturna in The 7D and Mina Loveberry in Star vs. the Forces of Evil.

Jack and Jill are the two nasty and manipulative outlaws united in a life of crime. They are both diabolical, brutish, mean and violent. However, Jack seems to have a more loyal, sensitive and trustworthy side: Throughout the film, he suggests to Jill that they settle down and raise a child together, such as his favorite piglet named Hamhock. However, Jill is completely against the idea, preferring the criminal life instead. They also appear to be traitorous and greedy in nature.

Jack and Jill are in the possession of the magic beans from the Jack and the Beanstalk story. Eventually, Puss, Kitty Softpaws, and Humpty Dumpty track them down in their piglet-filled cart and, after battling them, manage to steal to get into the giant's keep.

However, it is later revealed that Jack and Jill were in cahoots with Humpty and Kitty to take the Golden Goose and trick Puss into being imprisoned in his home town. Jack and Jill were seemingly just Humpty's minions. Later on, the Great Terror arrives to retrieve the Golden Goose, its baby. It is revealed that Jack and Jill were planning to betray Humpty all along, wanting more than just golden eggs but the actual goose. They try to steal the Goose when Humpty had a change of heart and tried to help Puss lure the Great Terror away from San Ricardo, holding their gun to Humpty's head, only for Kitty Softpaws to fight them off and then be stomped on by the Terror.

During the credits, Jack and Jill are seen in full body casts. It is most likely that they will be sent to jail to pay for their crimes, once they've recovered from their injuries. 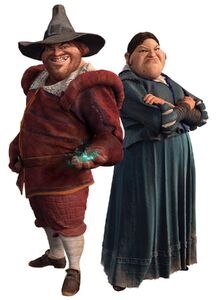 Jack's defeat in the credits.

Jill's defeat in the credits. 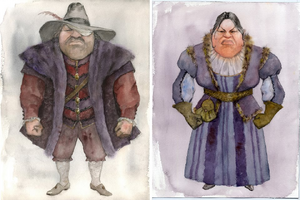